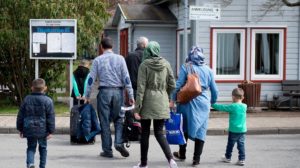 The UAE has committed to taking in 15,000 Syrian refugees over the next four years.

The promise of sanctuary by governments and the prospect of jobs may have steered young Syrian refugees to select Canada, the US, the UAE and Germany as the countries they would like to live in.

In ‘A Voice for Young Syrian Refugees’ survey released on Thursday, about 27 per cent of 400 Syrian refugees living in camps and settlements in Jordan and Lebanon picked Canada as number one, with 23 per cent choosing the US and 22 per cent deciding on the UAE and Germany.

The UAE had committed to the United Nations last year that it would receive 15,000 Syrian refugees over the next four years.

This was announced by Reem Al Hashimy, Minister of State for International Cooperation at the Leaders’ Summit on Refugees at the UN.

The UAE has granted residency permits to more than 100,000 Syrian nationals raising the number of the Syrian community in the country to more than 242,000, as per government data.

The country has provided more than US$750 million to support Syrian refugees in neighbouring countries by providing food, basic health services, water and sanitation.

In Canada, the refugees’ number one choice, more than 40,000 Syrians have been resettled until early this year as part of an initiative where the government works with private sponsors, non-government organisations, provincial and municipal governments.

Canadian Prime Minister Justin Trudeau also told a UN conference last year that much more needed to be done to help the refugees and asked for countries to look for additional ways to help solve the crisis.

The US reached its target last year of taking in 10,000 Syrian war refugees in a year-long resettlement programme.

This was before US President Donald Trump signed sweeping orders this year to ban travel to the US by citizens of Syria, Iran, Sudan, Libya, Somalia or Yemen.

“Government policies would impact the lives of the refugees and this reflects in their decisions of where they would want to live,” said Sunil John, chief executive of Asda’a Burson-Marsteller, which commissioned a survey of young Syrian refugees in camps in Jordan and Lebanon released Thursday.

“The UAE would be their choice because of the possibilities of getting a job, a livelihood and because of the massive humanitarian aid that has been sent by the UAE to refugee camps. In the case of Canada, it is because of the pro-refugee policy of Prime Minister Trudeau. And despite President Trump’s travel ban, the refugees still hope their dreams of going to the US will be fulfilled.”

The UAE topped the list in the overall Arab Youth Survey covering 16 countries released in May, as the place young Arabs wanted to live in and would like their own nations to emulate.

One in three young Arabs of more than 3,000 interviewed had said they would like to live in the UAE making the country more than twice as popular as the US, followed by Saudi, Canada and Germany.

UAE’s new expat teachers given an education in Emirati culture