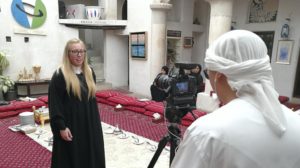 UAE’s new expat teachers given an education in Emirati culture

The Ministry of Education organised a two-day workshop for new teachers to give them cultural training ahead of their deployment across the country.

Tips on how to dress, greet and use social media without getting into trouble with the law, are being offered to foreign teachers who began arriving in the UAE last weekend.

Five hundred new non-Arab teachers, most of whom have never been to the UAE or the Middle East before, are being schooled on the local lifestyle through practical lessons and field visits, ahead of the upcoming academic year.

The teachers – who have come from Europe, North America and South Africa to teach at public school across the country – are being given cultural training during a two-day awareness programme held by the Ministry of Education.

“We did an in-house induction the past few years, and what we found is that we were doing it from a western perspective,” said Geraldine Craven, a specialist at the Ministry’s training department and who is in charge of the programme.

“There are some things that teachers can do in their own country, but when they come here, they see these things are not culturally acceptable. So we want to give them training from an Emirati perspective.”

“People often come and think that the UAE is just about Dubai, so they have a very particular view. But our teachers will teach all over the Northern Emirates, where there is a much more traditional culture,” she said.

Alternatively, they may have heard of other Middle Eastern countries where women dress and work differently, “but here they notice it is very welcoming and people are very open about their culture.”

“It is not difficult to live here,” Ms Craven said.

The programme takes an interactive approach in explaining why certain things are deemed unacceptable in the UAE by explaining the difference between UAE law and that of their home countries.

“There is a great deal of misconception around the legal use of social media. So we have to talk to them about how you shouldn’t slander or be disrespectful or talk about someone as it could get you into trouble,” Ms Craven said.

However, the programme is not limited to explaining a list of rules. On the second day of the workshop, the teachers are taken to the Sheikh Mohammed Centre for Cultural Understanding in Ajman, where they learned the A-B-C’s of the local lifestyle from Emirati students and volunteers.

“They go to the majlis, they see how families use their rooms differently… and the etiquette about the coffee and the dates.”

“They also get to go inside a mosque and ask about some religious practices… some may have never heard about this before,” she said.

Upon completion of the training for the first batch of 80 teachers on Monday, Daphne Ho said she noticed some similarities between the UAE and China, where she used to teach.

She noted “the level of respect towards teachers and elders and each other.” She also remarked that “the image is a very personal thing and people do care about what other people say and see.”

Despite it not being her first experience with Middle Eastern culture – having previously tutored Saudi Arabian students while living in the US – Ms Ho, 32, who will be teaching English in Ras Al Khaimah, said “it was interesting to learn about the history and how people are nowadays and how it is different from what I know.”

When Luke Loveitt arrived in Sharjah on Saturday, it was the first time he set foot in the Middle East.

“I did a little bit of research before coming out from expat forums, but literally since being here in the country I’ve been welcomed and it is very nice to learn about the country, a little bit of traditions like the dress stance around here, and local food.”

He said the Ministry’s programme was more of an eye opener and showed the teachers what the environment would be like.

The 26-year-old Briton will be teaching physical education at a secondary school for boys in Sharjah.

“We were told what to expect from the students and families from around the local areas. Protocols in schools. One about being respectful was the main thing — while in shopping in malls, on the street.”

Among other things he learned was to only shake hands with men, unless the woman offers.