Survey shows almost 90% of children in the UAE and Saudi Arabia have access to mobile devices.

The rapid rise of mobile entertainment is a major contributor to increasing childhood obesity in the UAE and Saudi Arabia, a survey suggests.

An online poll by YouGov Omnibus found close to nine out of 10 children in those countries had access to mobile devices and spent an average of two and a half hours a day on them.

YouGov surveyed more than 1,000 parents in the countries to assess the effect of technology on children and its connection with obesity.

Data was collected between June 27 and July 4 – a time when many outdoor activities cease due to the region’s summer heat.

Despite this, most of the parents said they were making outdoor activity a priority for their children, with 70 per cent playing outside, half of them socialising with friends, 35 per cent playing sports and 20 per cent exercising.

“In a day and age where technology sits at the forefront of our existence, it is refreshing to see parents are still striving for a balance, pushing children to also partake in daily physical activity,” said Kerry McLaren, head of Omnibus Research.

Although 69 per cent of parents acknowledged that excessive use of technology contributed to childhood obesity, they admitted allowing their children to spend more than two and a half hours on devices every day. 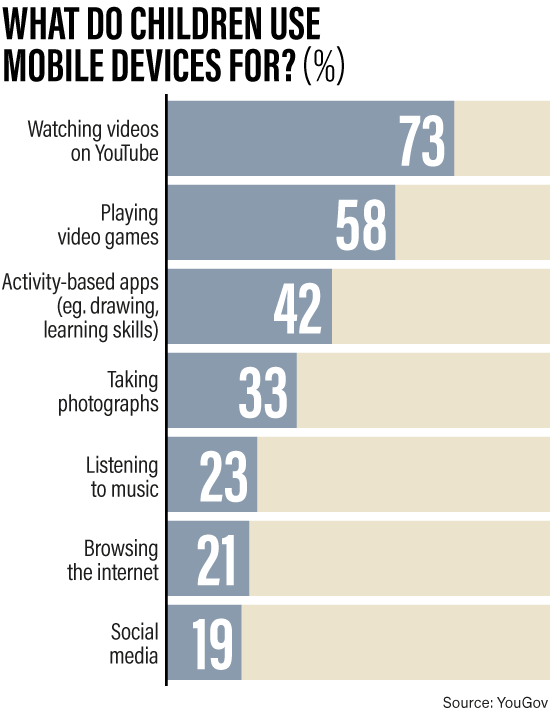 Family doctors say the survey findings are at odds with what they see in their clinics.

Health authorities estimate up to 40 per cent of the child population in the UAE are either overweight or obese, with that trend leading to serious health conditions later.

“Even though parents are striving to find a healthy balance between technology, food intake and overall lifestyle of their children, we still come across a lot of child obesity cases,” said Alaa Takidin, clinical nutritionist at the Canadian Specialist Hospital.

“This is mostly related to overuse of gadgets, lack of physical activity and unhealthy eating patterns.

“Technology is one of the main culprits behind the lack of physical activity, as kids find it more interesting to play games on smartphones rather than engage in outdoor activities.”

From September, Dubai Health Authority and the Knowledge and Human Development Authority will enforce two and a half hours of exercise a week in schools to counter obesity.

“Nowadays, childhood obesity is caused by two main factors – technology and junk food,” Ms Takidin said. “Parents need to understand they are role models to their children and need to engage in physical activity themselves to encourage them.”

The survey said that watching YouTube videos was the most popular activity, with 73 per cent of children using the channel and 58 per cent playing video games.

Twitter was the least popular social media site, used by only 16 per cent of the children.

“Children are bombarded by digital media on smartphones, tablets and home computers,” said Dr Sanjiv Kumar Kakkar, a specialist in paediatrics at Al Zahra Hospital in Sharjah. “This has positive and negative side effects on their development and growth.

“Parents have guilt when they are unable to spend quality time with their children, and often compensate by giving them access to smart devices.

“Social media has displaced physical activity, but hands-on exploration and face-to-face social interaction in the real world is critical to learning, growth and development.”

The American Academy of Paediatrics recommends parents and care givers should develop a family media plan that takes into account the health, education and entertainment needs of each child.


Doctors advise families talk to children about it and become their media mentors.

“There has been an improvement over the years as parents now are more aware about the issue and pay attention to a child’s diet,” Mr Lengweng said.

“If certain measures are initiated early in a child’s life, it sets a good foundation. Social media too is a strong tool in bringing the matter to their attention.

“It’s our responsibility to help our children in overcoming obesity with proper education and support.”