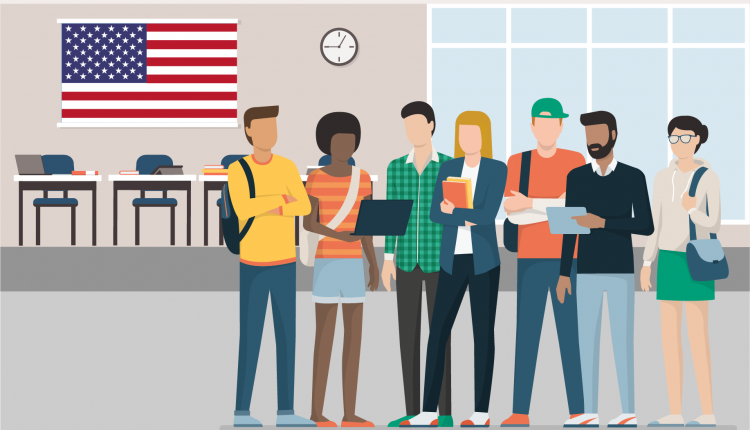 UAE students enrolled at American universities are facing an uncertain future after US authorities warned on Monday that learners would be deported or made to transfer to different institutes if their classes remained online in the autumn semester.

US President Donald Trump has insisted that schools and universities reopen lecture halls as soon as possible.

After the guidance was released, Mr Trump repeated on Twitter that schools must reopen this autumn, despite the country still facing an uphill battle to contain Covid-19 infection rates.

“Non-immigrant F-1 and M-1 students attending schools operating entirely online may not take a full online course load and remain in the United States,” the US Immigration and Custom Enforcement agency said.

“Active students in the United States enrolled in such programmes must depart the country or take other measures, such as transferring to a school with in-person instruction to remain in lawful status.

“If not, they may face immigration consequences including, but not limited to, the initiation of removal proceedings.”

UAE residents studying at US universities are anxiously waiting for clarification regarding the new rules.

Sakshi Chandak, 18, a second-year psychology student at Arizona State University, returned to the UAE last month after being stuck abroad for months during the Covid-19 pandemic.

Ms Chandak did not feel it was safe to return to the US, where coronavirus cases have crossed three million.

“I am hoping the university goes online and I do not have to go back in August as I want to stay here till December,” Ms Chandak said.

“This decision affected a lot of people and I don’t know if they (authorities) have considered the implications. I’m stressed about my immigration status. If I enter the country after August 27, then I may not be allowed in.

“Many international students who are still in the US are worried they will get deported to their home countries.”

Ms Chandak said international students who were pondering going to the US earlier are rethinking this decision.

Khushi Udupi, 19, a student at the University of South Florida, remains in the US at present but will return to the UAE this week.

Ms Udipi, who is Indian, said the authorities’ decision would delay her graduation and affect her career plans as she would be only be able to take a limited number of courses online.

The student will be travelling to the UAE on July 9 on a tourist visa and plans to renew her UAE residency visa.

“I have secured myself from potential removal procedures from the ICE in the case that my university retracts all on-campus classes so I am not scared of deportation. I am worried about the downgrade that might take place on my visa status for me to return in January for the spring semester,” she said.

Ms Udipi was concerned for her health and did not wish to return to the US in August because of the pandemic.

“The US has made me and international students feel completely rejected and unwelcome,” she said.

The University of South Florida is currently offering online courses for the summer semester but plans to start hybrid courses this autumn.

Peter Davos, the founder of Hale Education Group, an education consultancy that sends students to US universities, said he does not foresee an exodus of international students.

“The rationale behind this decision is that President Trump is trying to put pressure in universities to open their doors,” he said.

“He is keen on reopening the economy and businesses and is using this as a pressure point to compel universities to open their doors.

“I have faith in the abilities of the universities to take care of their students and they are not going to have a situation where there will be a mass exit of students from the US. I think this situation will be resolved before September.

“I have faith that there will be a solution that will not result in the most extreme situation that is being outlined with the deportation of students.”

Sidhant Mathur, 20, from India, was excited to start his fourth year of study in economics at the University of California, Los Angeles, in September.

Now, he is waiting for his university to clarify the new announcements from federal authorities.

Mr Mathur said he had online lessons for the last term but the university will follow the hybrid model from September.

He said it would be ideal if students could maintain their visas but study online from elsewhere in the world.

“I would like to stay in the UAE and study online in the next term. I am concerned about my visa status and if I have hybrid classes authorities have said we should ideally be attending classes in person but they have not suggested alternatives,” Mr Mathur said.