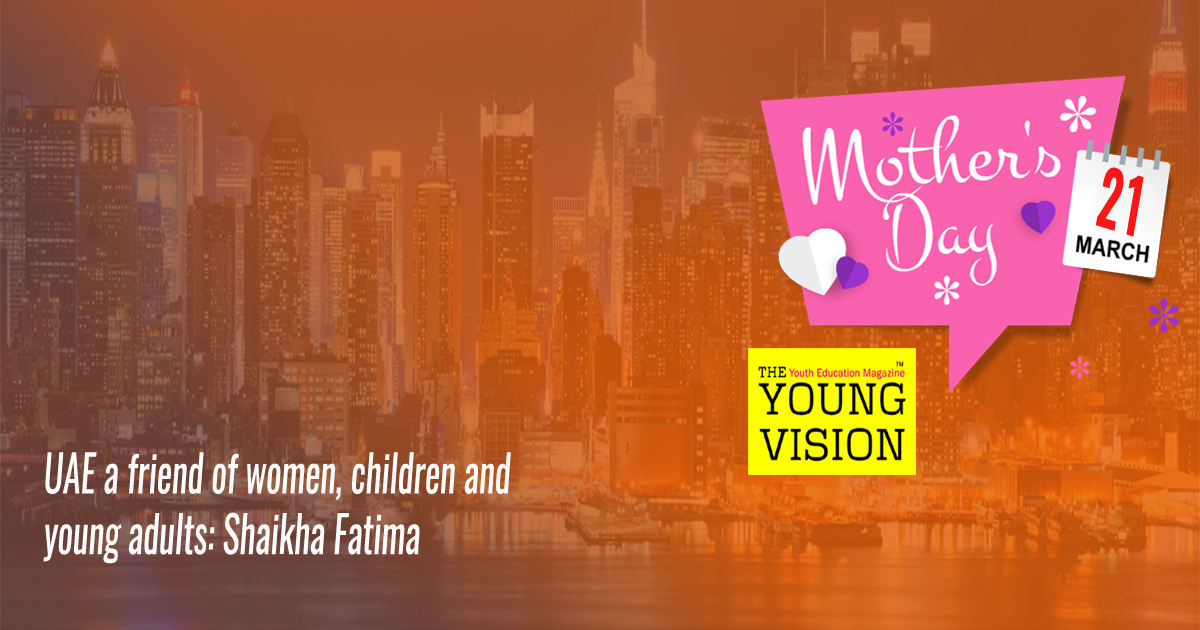 Shaikha Fatima Bint Mubarak’s remarks made on the occasion of Mother’s Day, marked in the UAE on March 21

Abu Dhabi: On the occasion of Mother’s Day, which is marked in the UAE on March 21, Her Highness Shaikha Fatima bint Mubarak, Chairwoman of the General Women’s Union, President of the Supreme Council for Motherhood and Childhood, and Supreme Chairwoman of the Family Development Foundation, said that Emirati mothers have demonstrated their strength and resilience, becoming a role model of motherhood, some being mothers of martyrs who sacrificed their lives to defend and protect the homeland for future generations.


In a speech on the occasion, Shaikha Fatima also praised the UAE mother’s keenness to raise her children to noble values and virtuous principles, which resulted in an educated generation able to contribute effectively to the UAE’s march of development under the leadership of President His Highness Shaikh Khalifa Bin Zayed Al Nahyan, and following in the footsteps of the late Shaikh Zayed Bin Sultan Al Nahyan, who have always supported women’s empowerment.

Shaikha Fatima said that as part of her efforts to empower women, she has drawn up a national strategy for motherhood and childhood in 2017, which aims to make the UAE “a friend of women, children and young adults,” and boost ongoing efforts to encourage their participation in building society and enable them in all fields.

The strategy will also work to enhance the rights of mothers, children and adolescents as a key component of its objectives, policies, initiatives and projects, by providing support and better maternal healthcare.

The strategy also includes creating mother-friendly environment in public spaces as well as mother-and-child friendly workplaces, in addition to improving healthcare and safety for children and support opportunities for their learning and development.

She said: “The UAE is keen to strengthen the education of mothers and support them through a variety of development programmes, and to encourage parents to have a balanced relationship, based on dialogue, mutual understanding, and to be open and considerate to each other’s ideas.”

“Maintaining the health of the mother has always been one of the main areas of concern to me. It makes me so happy to witness the tremendous development seen by the health sector throughout the country since the establishment of the UAE in 1971, a period which successfully eliminated all epidemic diseases,” she added.

“In the UAE, we are committed to supporting mothers and to providing them with quality healthcare in order to protect their lives and the lives of their children.”

Her Highness pointed out that the quality of pre-natal and post-natal care in the country has risen to levels comparable to those in the most developed nations in the world, and that the average life expectancy of UAE women is comparable to European countries and North America, as a result of a significant reduction in infant and maternal mortality rates.

Shaikha Fatima congratulated Emirati mothers and all mothers in the Arab and Islamic world, on the occasion, which she said is an opportunity to highlight the role of mothers in raising generations and helping them succeed.

Abu Dhabi: Shaikh Hamdan Bin Zayed Al Nahyan, Ruler’s Representative in Al Dhafra Region and Chairman of the Environment Agency – Abu Dhabi (EAD), has paid tribute to Her Highness Shaikha Fatima Bint Mubarak, Chairwoman of the General Women’s Union (GWU), President of the Supreme Council for Motherhood and Childhood, and Supreme Chairwoman of the Family Development Foundation (FDF), on the occasion of Mother’s Day, which is celebrated in the UAE every year on 21st of March.

Shaikh Hamdan made the remarks while presenting a gift of five life-size bronze sculptures of the most important land and marine species in Abu Dhabi to Shaikha Fatima on Tuesday as a token of gratitude to her for carrying forward the vision of the late Shaikh Zayed Bin Sultan Al Nahyan.

“The achievements made by the Emirati women through the past decades are a source of pride, not only for the UAE but for the whole world,” said Shaikh Hamdan.

“It is our duty to continue this legacy and to always do what is necessary to ensure a better life for the generations to come,” he added.

Shaikha Fatima said she was pleased with the sculptures, symbolising nature, which the late Shaikh Zayed Bin Sultan Al Nahyan took time and efforts to nurture.

She revealed that the sculptures, made by Jill Parker, a leading artist in bronze animal sculptures, will be displayed to the public at the Umm Al Emarat Park in Abu Dhabi.

The importance of unlocking creativity in the classroom