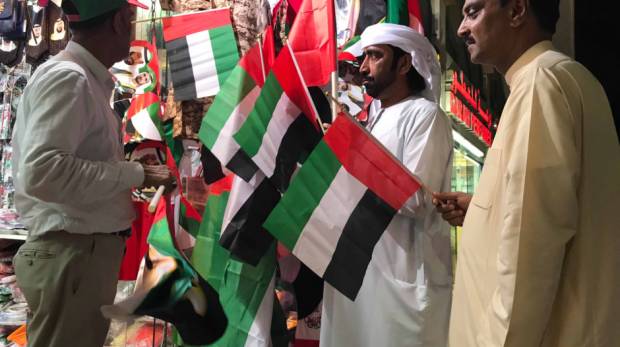 UAE Flag Day was celebrated on November 1, here is all you need to know.

Abu Dhabi: The UAE flag — a symbol of pride, loyalty and belonging for both Emiratis and expats — will be seen decorating the country on UAE flag day, which falls on November 1.

Flag Day is marked on November 3 every year, which is the anniversary of President His Highness Shaikh  Khalifa Bin Zayed Al Nahyan taking office. This year, however, His Highness Shaikh Mohammad Bin Rashid Al Maktoum, Vice-President and Prime Minister of the UAE and Ruler of Dubai, announced the celebration on November 1 as November happens to be a Saturday.

On this day the UAE flag is hoisted across all government departments and buildings across the emirates.

All members of the UAE community, including private companies, keenly participate in this joyous occasion.

“The UAE flag is a symbol of our union, strength and a source of pride for our forefathers and sons,” said Fadheela Al Muaini, deputy chairman of the UAE Journalist Association.

She said every citizen should be dedicated to giving everything for the sake of holding the nation’s flag high and providing a decent and prosperous life for the country’s people, adding that “our prayers will always be for safety and security forever, and we ask Allah to forever bestow upon us His grace and bounty”.

Jameela Al Hameli, board member of the Emirates Human Rights Association, said: “We united the timing for raising the flag, to tell everyone that we are not a group of emirates but that we are a united UAE, and to instill in the coming generations the fact that our flag is the symbol of our respect for the nation.”

Al Hameli said we not only reaffirm our allegiance to the UAE flag — a symbol of the country’s unity, greatness and aspirations of Shaikh Khalifa for a better future — but also remember the people who sacrificed their lives for the nation. “Being honest, I will pay homage to the martyrs by remembering them in my prayers and going out with the family to teach my children the significance of the UAE flag, apart from its length and colour,” she said.

Dr Nawal Al Hosani, Permanent Representative of the UAE to the International Renewable Energy Agency (Irena), said: “Today, we take confident and steady steps towards a bright and promising future, inspired by the legacy of Shaikh Zayed Bin Sultan Al Nahyan and the country’s founding leaders.”

Dr Al Hosani, also Deputy Director General of the Emirates Diplomatic Academy, added: “Our celebration of the flag day reflects the principles of unity, honour and pride. It is a true expression of our wise leadership, and reiterates the Emirati belief system, loyalty and sense of belonging to our homeland.”

The UAE flag can be placed on lamp posts during national holidays. The flag should be hung horizontally, with the red portion on top. It is forbidden to hang any other flag on the same street.

As for the UAE Presidential Flag, with the presidential emblem at its centre, it should not be used or hoisted under any circumstances on the outside or inside of federal buildings. This is because the flag represents the President, and he is the only person authorised to raise it.

According to the Ministry of Culture and Knowledge Development, the UAE flag law states: “Any person who publicly drops, damages or in any way insults the Union flag, the flag of any member emirate in the Union or the flag of any other country as a result of disgust or contempt of the powers of the Union, the emirates or the relevant countries, shall be punished by prison for a period of no more than six months and a fine of no more than Dh1,000.”

While the UAE’s flag is made up of the traditional pan-Arab colours, what those colours represent in a special way is important to Emiratis.

Red: Red represents hardiness, bravery, strength and courage. The vertical red band can also be interpreted as uniting all the other aspects.

White: White represents peace and honesty while also symbolising the generosity and humanitarian works carried out in the UAE. White is the purest colour, and is interpreted by some to symbolise cleanliness.


Black: Contrary to popular belief, the black band does not represent oil. It stands for the defeat of enemies, and also strength of mind.

Here is how you can help Someone Living mental illness