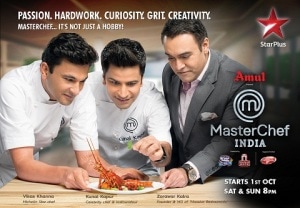 After 4 successful seasons, MasterChef India is back with its 5th Season. This year, the show aims to change the way cooking in perceived in this country and prove it to be a serious talent and pursuit. So gear up for a game of ‘Glocal’ recipes, exotic destinations, toughest challenges and most demanding judges for the fifth season of MasterChef India. After all, it is #NotJustAHobby but a journey to win the title of the best culinary artist in the country. The show will telecast its first episode on 1st October on STAR Plus! 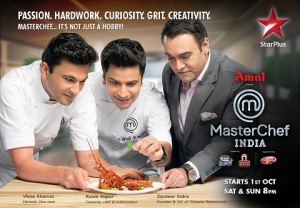 Get ready to meet a brand new judge, ‘Prince of Indian Cuisine’ – Zorawar Kalra – the man behind the popular restaurants like Farzi Café, Masala Library, Masala Bar and more. Geared up for the new season, we will see the culinary heartthrob, Chef Vikas Khanna along with the master of culinary art, Chef Kunal Kapur on the show.

Commenting on his first venture with Indian television, Zorawar Kalra said, “MasterChef India, over the years, has not just created a platform for those who have a passion for cooking to showcase their talent, but has also brought forth the profession to the international centre stage, taking the art of cooking to a whole new level. Today we are witness to a huge audience from around the world, irrespective of age & gender, looking at making their passion for cooking as a full time career choice, which was a rarity a few years back.”

Chef Vikas Khanna has been a busy man and was recently seen sharing his thoughts on bringing some new tasks to the show, “We have been meeting talent all over the country. Their skills are unique and complements their stories and experiences. India is full of surprises and the best way to experience this is by meeting these contestants as they showcase their adventures in every dish and task we put together. The enthusiasm and spirit to win the ‘MasterChef’ title has never been as infectious across the globe as in season 5.”

Elated with the enthusiasm received during auditions from all over India, Chef Kunal Kapoor revealed, “Our country has an overwhelming variety in terms of the talent we see coming for auditions. Each contestant is an artist, putting together years of hard work, practice and learning from experiences in his or her food. It is exciting to be able to lead such a community on a television show of international stature – MasterChef.”

Deepak Dhar, MD and CEO Endemol Shine India, the production house behind the show, said, “Endemol Shine India will this year take the best of Master Chef India and make it better than ever before! Season 5 will be an all new rebooted, refreshed and aromatically flavoured season of Master Chef India with a celebrated Jury combining the old faces and the new, brilliant guest chefs, bright new talent, exciting challenges and beautiful flavours and locales from India and across the globe to create a truly remarkable series. For Indians everywhere eating food is a delightful experience and therefore every dish served this season with have to touch the heart, while pleasing the eye with its appearance and enticing the taste-buds with its taste.”

This arduous season is all about talented contestants from different backgrounds, different professions, with different style of cooking but what brings them all together is their passion for food & dream to win the coveted crown of MasterChef India.  Season 5 of MasterChef India will reiterate that cooking is not just a daily chore or pastime but it takes years of experience, knowledge, practice, patience, sweat, toil, talent and expertise to be the master of the trade.

Culinary guru or a foodie or seeker of good entertaining content, all you need is a family reunion by the television screen to be thrilled by the drama, action and stories in the show while you note the tricks of the trade from contestants and judges. Tune in to be an audience to the contenders who will battle it out to win the ultimate crown of being the next MasterChef.

Get your best foot forward as STAR Plus brings to you a steamy rendezvous with exotic food and awe-inspiring success story of our new MasterChef India for the fifth season. Follow our judges and contestants who won’t let you mistake your culinary love for a mundane chore, after all it is #NotJustAHobby!Catch the exciting episodes of MasterChef India Season 5 on STAR Plus starting 1st October every Saturday and Sunday at 8 pm!

The Fascinating World of Robotics