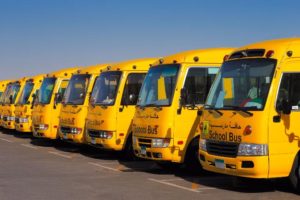 DUBAI — The joint committee of the Ministry of Education and Emirates Transport announced the adoption of the smart system for students’ safety in all school buses in Dubai and the northern areas.

This step is being implemented within the framework of the efforts by both parties to promote safe and secure school transport, as per the highest international standards.

Eng. Abdulrahman Mohammed Al Hammadi, Under-Secretary of Ministry of Education, stressed the desire of the ministry to provide the safety and security requirements in all school transport facilities, through the ongoing co-ordination with Emirates Transport, so that students can be tracked in their buses with smart and advanced technologies.

He noted that the initiative would contribute in providing the technological methods to enable the operation centres in the ministry to track school buses and confirm their compliance with the rules and legislations.

Mohammed Abdullah Al Jarman, General Manager of Emirates Transport, highlighted the keenness of the institution to introduce creative, innovative and smart tools to strengthen the safety and security standards in school transport services.

Al Jarman emphasised that Emirates Transport had started the installation of the smart system devices. The first phase includes installing the devices in 2,345 school buses between August and October 2017. The actual implementation would start in November 2017. The system would cover all the school buses that serviced the 100,000 students enrolled in 383 government schools in Dubai and the northern areas, he added.

Al Jarman remarked that the smart system aimed to provide additional defensive lines. It aimed to prevent incidents of students being left behind in buses or other human errors by providing three advanced devices. This would include the student’s identification card to ensure that the student has boarded the bus. The card will inform parents about the child’s movement during the school bus trajectory.

He added that the second device would ensure that the bus is empty by the end of its trajectory. The third device would be a motion detection system that would automatically monitor any movement in the bus after it is closed and would emit loud sound alerts, as well as instructions for students left behind in the bus.

He added that there were other central devices that would be integrated with each other, including digital recorders that could be used as a contact point for all the devices installed in the bus through electronic ports that could translate the outcomes to the drivers, save the trajectory information for the central control room, as well as a screen that would display the content taken by the seven cameras installed in the bus and outside it. The central control systems will monitor the movements of the buses and send warnings about the events taking place on the roads.

What’s the use of education? Amartya Sen puts the case for the defence