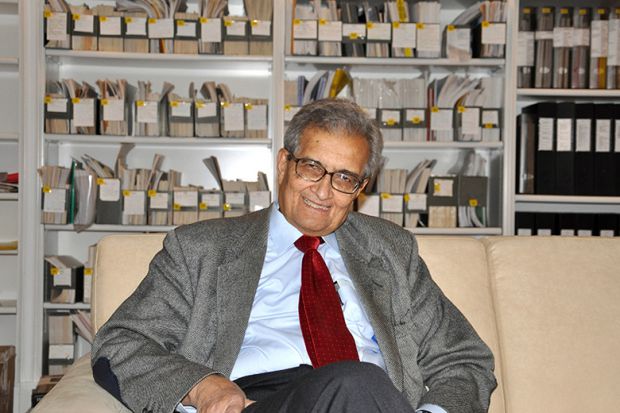 What’s the use of education? Amartya Sen puts the case for the defence

Matthew Reisz enjoys an evening in the company of a Nobel Laureate and academic superstar.

It was a bit like attending a rock concert. I knew that Nobel laureate Amartya Sen – Thomas W. Lamont university professor and professor of economics and philosophy at Harvard University – had made major contributions to moral philosophy, development economics and human rights. But I was still startled by the great roar of acclaim that greeted the 83-year-old scholar as he came out on stage to deliver the keynotes lecture at a conference launching the new Centre for Education and International Development at the UCL Institute of Education.

The young Asian woman sitting next to me made gestures of obeisance. And Michael Arthur, provost and president of UCL, introduced him as “one of the greatest minds of the 20th and 21st centuries”.

Sen had been billed to speak on “What’s the use of education?” and he got off to a great start recalling how he had heard that question before. He had first arrived in Britain in 1953 “on a slow boat to London from Bombay”, along with the Indian women’s hockey team. When one of the players asked why he was coming to England, he shyly admitted it was for educational purposes.

“I always hated school,” the young woman replied. “What’s the use of education?”

Sen told her he didn’t know how to play hockey and she offered to teach him, so he pointed out that would count as a form of education.

His lecture finally gave him a chance to explain to the hockey star and other sceptics why education can be both “useful and fun”.

This led to a rapid survey of how Enlightenment Europe had “first showed how whole societies can be transformed by universal education” – and how this was taken up in Asia in the 19th century (although he feared that Britain was now retreating from these ideals as a result of a referendum campaign based on “alternative facts”).

“The big penalty for colonised countries”, Sen argued, “was lack of education.” Newly independent India had inherited literacy rates of only 12-13 per cent in 1947 and made slow progress in raising them.

Quite apart from its impact on employment prospects, Sen went on, “illiteracy muffles the political voice of people and leads to insecurity”. Even basic levels of education, by contrast, could “help with health policy”, “stimulate an interest in human rights” and make people more aware of their legal rights. Schooling for girls in particular played “a big role in empowering women” and reducing the size of families. Educational backwardness in many countries was “a key reason for lack of development”.

Much of this is reasonably familiar territory, but Sen delivered his message with great passion and panache, and came up with some witty and learned responses to interventions from the audience even when he was too hard of hearing to understand the questions.

In concluding his lecture, Sen quoted the views of H. G. Wells that human history was becoming more and more “a race between education and catastrophe”. He offered it as his “firm belief that we cannot allow catastrophe to win”. If only his hockey-playing friend had been there to witness the standing ovation.