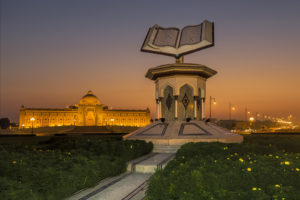 SHARJAH — Signalling a ground-breaking achievement for the UAE and the Arab world, Sharjah has been crowned with the prestigious ‘World Book Capital’ title for 2019 by the United Nations Educational, Scientific and Cultural Organisation, UNESCO. The honour is a recognition of the emirate’s pioneering role in supporting and expanding the local and regional publishing industries, promoting reading to become an intrinsic cultural practice, as well as embracing intercultural, knowledge-based dialogue.

The accolade is an important addition to Sharjah’s existing portfolio of milestones like, the 1998 Capital of Arab Culture, Capital of Islamic Culture in 2014, and Capital of Arab Tourism in 2015. The emirate is the first in the GCC and third in the Arab world and Middle East, to have received this recognition.

An international committee of UNESCO experts reached the decision at a meeting held at the Headquarters of the International Federation of Library Associations, IFLA, at La Haye, in the Netherlands. Sharjah has been chosen for the quality of its literary and cultural activities, and for its unfailing efforts to make books accessible to the entire population of the nation.

Sharjah is the 19th city to become World Book Capital. It is preceded by Conakry in 2017 and Athens in 2018.

Sheikha Bodour bint Sultan Al Qasimi, President of the Emirates Publishers Association and Head of Sharjah’s World Book Capital Organising Committee, said, “We are so proud to have been recognised on a global scale for literary excellence, and having our name being put on the same platform with some of the world’s frontrunners in the world of books and reading.”

“This signals a fruition of the momentous project that was established four decades ago by the vision of H.H. Dr. Sheikh Sultan bin Mohammed Al Qasimi, Supreme Council Member and Ruler of Sharjah. His Highness has led efforts of both institutions and individuals working to shape the emirate’s cultural identity with knowledge and books. It is his strong belief in intercultural dialogue as a means to advance local communities that has led to the establishment of a tolerant, culture-loving society in Sharjah,” she added.

Sheikha Bodour continued, “His Highness the Ruler of Sharjah’s insistence on knowledge being a conscientious human choice that goes beyond the arts and literature to include a space for free exchange of ideas within the Arab world, has helped us as a region to consolidate efforts regionally and globally. Sharjah has now reached a point where it can be safely said that it is a driver of knowledge in the region, and, in its achievements, mirrors the wisdom words of H.H. Dr. Sheikh Sultan Al Qasimi, ‘Culture is a message to move ahead and purify one’s soul. It is a force that takes us to higher levels of fraternity. Also, education is key to fuelling progress to see greater horizons’.”

Sharjah’s annual cultural calendar is packed with programmes and activities. It hosts more than 1,500 publishers from across the world at the Sharjah International Book Fair, SIBF.

Another premier cultural event is the Sharjah Children’s Reading Festival, SCRF, dedicated to fostering a love of reading and knowledge among children through innovative and interactive methods. The festival features celebrated international authors, more than 2,000 events and attracts over 300,000 visitors annually.

Sharjah has also launched crucial initiatives and pilot projects to achieve its vision to promote maximum community involvement in reading. Knowledge without Borders, KwB, is one such example, which has established free home libraries for 42,000 Emirati families last year.

Sheikha Bodour launched the ‘Kitabi Al Awal’, My First Book, initiative, which aims to develop a love for books and stories among new-borns. Under the initiative 5,000 book hampers were gifted to expectant mothers across more than 60 healthcare centres and medical clinics in the UAE.

Sharjah has also adopted a proactive strategic vision to develop and galvanise the publishing sector in the region, an approach that was reflected in the establishment of Sharjah Publishing City, SPC, to solidify the emirate’s stature as a global hub for stakeholders and professionals looking to expand into the fast-growing Middle Eastern publishing and printing markets. SPC’s strategy places special focus on supporting writers, translators, illustrators, literary agents and copyrights professionals, especially in view of the rapid technological advancements in the global publishing industry.

Special attention is afforded to public libraries in the emirate with regular content and knowledge updates, enabling the community at large to access the latest and most important publications, and reference materials for researchers in the emirate and beyond.

Sharjah was the first emirate in the UAE to establish a formal school and public library. It was also the first emirate to house many cultural institutions like the Emirates Publishers Association, the Emirates Writers Union and the UAE Board on Books for Young People, UAEBBY, all targeted to support the book publishing industry.

Since 2001, UNESCO has been selecting a World Book Capital every year on the grounds of certain criteria, where the title is awarded to the city, which shows continued excellence in charting a cultural programme of activities throughout the year to promote reading and books focusing on grassroots community involvement. The criteria include the breadth and impact of cultural programmes, and quality of events tailored by countries to promote books and reading.

Sharjah was chosen owing to the quality and diversity of its yearlong cultural programme, which stood out among the other entries competing for the 2019 title. Designated as the UNESCO World Book Capital 2019, Sharjah will be rolling out a wide range of activities and events over the year. Specialised committees will be formed to organise and supervise these events.