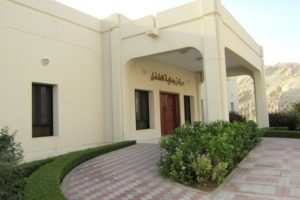 MUSCAT // Maryam Al Ajmi heard the familiar muffled cry from her bedroom window and knew at once that another baby had been left on the doorstep of the orphanage.

It was just after 5 o’clock in the morning, a few minutes after the call to prayer – the most common time for babies to be “dropped” on the doorstep of the orphanage in Muscat.

She found a bundle wrapped in cashmere blanket, picked it up lo

“It was a baby boy and the third newborn we received this year,” said Ms Al Ajmi, one of 12 surrogate mothers living in Al Jameel Orphanage in the Omani capital of Muscat.

“We can tell that the mother is from a wealthy family because of the quality of the blanket.”

Al Jameel is one of eight orphanages in the country, most of them managed and funded by the government.

The number of abandoned infants left in the hospitals or in orphanages in the Sultanate rose 11 per cent in 2016 to 54 compared to a year earlier. Social workers say that about 75 per cent of the babies are fostered by families before they reach the age of 8 months.

“The rest, unfortunately, stay longer and some up to the age of 12. If they are not fostered by the age of 18, we find them jobs and they start looking after themselves,” Jamila Al Siyabi, a social worker in the ministry of social affairs, said.

“We strictly supervise their welfare – from their food, accommodation, play areas, education to the clothes they wear – while they are in the orphanage.”

Most of the babies are abandoned by unwedded mothers under pressure from their families. But some are discarded by housemaids when they get pregnant, after having an affair with their boyfriends or even their sponsors.

“These are the two main reasons, apart from a few babies who are deformed. We can’t always tell under what circumstances these babies end up in orphanages but sometimes we know from neighbours or friends of the mothers,” said Asia Al Hallabi, another social worker.

She added that information on how children are abandoned is difficult to come by.

Individual orphanages and hospitals have their own privacy policies about whether to release information to the public about abandoned babies.

“It is also about the local culture. Parents avoid the shame of having a daughter who got pregnant out of wedlock. The girls are sent into isolation until they deliver then forced to abandon their babies,” Ms Al Hallabi explained.

There are no statistics on the total number of children who have been fostered but those who are still in orphanages are estimated to be around 3,500 nationwide, according to Ms Al Hallabi.

Official manpower agencies say some abandoned babies are left at orphanages by the sponsors of housemaids who become pregnant.

“The sponsors, usually the wife, come back to us to demand their fees back when housemaids get pregnant. Then follows the argument that nobody can win when the housemaid claims the father of the unborn child is her boss,” Kareem Hassan, a manager of one of the agencies told The National.

“To avoid legal procedures, the sponsors would allow the baby to be born, leave it to the orphanage, pay generously to the housemaid and send her back.”

To encourage foster families to take in orphans, the government pays a monthly allowance of 100 rials (Dh950).

All orphans get Omani citizenship regardless of their mothers’ nationalities. They also get free scholarships when they finish secondary school and automatic jobs when they graduate.

The perks also include free land of about 600 square metres when they reach 25 and a low interest mortgage to build their homes.