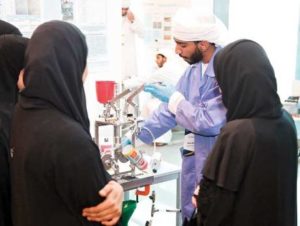 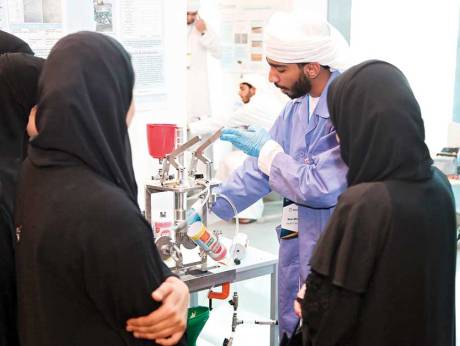 Abu Dhabi: Freshman engineering students at Khalifa University showcased their skills and talent at an exhibition hosted by the institution on Wednesday, with the students developing innovative projects intended to help society.

The exhibition saw the participation of 240 engineering students who were challenged to come up with ideas and solutions to community challenges. The projects that were developed were wide ranging covering a number of areas including health, clean energy and recycling.

One of the projects on display was the Smart Stethoscope, which saw the development of a device to help monitor breathing and heart rates to improve the diagnosis for pneumonia.

“Our project is designed mainly for poor countries and hospitals that cannot afford the proper equipment to help diagnose patients. When you buy a stethoscope, you probably spend more than Dh200, and our goal is to provide a device that costs less,” said Kenan Al Aqeel, a Syrian student involved in designing the device.

“The device that we built has a sound detector sensor, and a covering with rubber material to get the vibration from the heart sounds. When the device gets the heart sound, it can start giving you the heart rate, thanks to a coding process we developed.

“So, for example, when we are monitoring the heart rate for one minute, it shows you the beats and after that you get the accurate heart rate, for instance, a measurement of 110 beats,” he added.

Al Aqeel said the device can be attached to the patient’s chest, and that their device should cost only Dh30, providing a big boost to poorer patients.

“The device provides a system that manages to monitor the breathing rate which can hopefully improve the diagnosis of pneumonia and save lives.

“The goal is to help poor people and provide a solution. In Africa, people sometimes use their bare hands to measure the heart beat, and this is not a very accurate way to measure the beats, it can lead to an insufficient analysis which doesn’t help with coming up with a suitable diagnosis,” he added.

Another innovative project on display was Tremor Free Me, a device intended to limit the tremors caused by Parkinson’s disease.

“The device took us around six weeks to make. It can predict the speed of the shakes caused by the tremors associated with Parkinson’s disease,” said Hassan Odeh from Jordan, and one of the team’s participating students.

“The device is very light, it can be worn as a bracelet or a strap, and as soon as they get a tremor, the device will be able to detect it and apply the opposite oscillations to cancel it,” he added.

Odeh said the device would be a benefit for people with Parkinson’s disease as it could limit their uncontrolled body movements.

“The range of a shake caused by Parkinson’s disease is between 3.5 to 7 hertz. The motor can vibrate in an opposite oscillation frequency which will cancel the shake of a person’s hand so they can write clearly without much shaking.

“The device may not fully reduce all of the shaking, but it can help minimise it to some degree,” Odeh added.

Cisco honours for Dubai-based BIOS ME