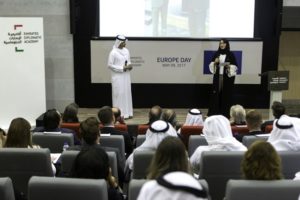 ABU DHABI // Young Emirati diplomats will be key to bringing peace and reconciliation to the Middle East, a group of students heard this week.

Reconciliation seems difficult amid tensions and turmoil in the Arab world, but Bernardino Leon, president of the Emirates Diplomatic Academy in Abu Dhabi, likened its future to the unification of Europe following the Second World War.

“When you think of what’s going on in Syria, many of our students ask what will happen tomorrow and how will people live together,” Mr Leon said.

“Europe is the best example to not only make peace, but [to show] that it is also possible to have a real reconciliation.”

He was addressing the academy’s students and 14 European ambassadors to the UAE at the 60th anniversary of Europe Day celebration in Abu Dhabi this week.

Mr Leon said the UAE was a very successful model for the Middle East, sharing with European countries the values of “governance, tolerance, giving, generosity and solidarity”.

“It doesn’t make any difference which nationality you are. There is a real reconciliation in Europe, and we treat each other as if we are all from the same country,” said Mr Leon, a Spanish former diplomat who served as the UN secretary general’s special representative to Libya.

“Borders don’t exist any more, neither physically nor in our hearts, and I’m sure in this region we will see the same kind of reconciliation.”

He said the UAE would play a vital role in leading that unity.

“There are so many [people] living in the region, we are so optimistic about the future,” he said. “Young Emirati diplomats, especially female, are a brilliant group of future ambassadors and ministers.”

A group of Emirati students at the academy visited The Hague in The Netherlands and Belgium in March on a nine-day tour to get a feel for the responsibility that lies ahead of them. They were also trained in public speaking.

“As aspiring diplomats, it’s always been our dream to represent the UAE in Europe,” said student Amna Fikri.

“We understood even more the importance of Nato, preserving peace and security, and how real diplomatic work lies in building our networks and relationships.”

Salem Al Shamsi, 29, said he learnt how deeply the UAE was committed to growing ties with the European Union. The trip was also essential for practising the skills students had learnt at the academy.

“No matter how each country’s agenda is, we have to work around our differences,” he said. “We learnt that union is the most beneficial solution. This is what diplomacy, the UAE and Europe are all about.”

Living as a diplomat made Ahmad Al Falasi, 24, proud to represent the UAE.

“We never know what crisis we may encounter or what challenge we may face and where we may be posted,” he said. “What we learnt didn’t end in Europe. We’ll always carry these insights through our diplomatic career.”

Visiting the Dutch parliament was a highlight for Roudha Alboom.

“As a woman, I had the obligation to support women, education and empowerment internationally,” she said. “It was such an empowering talk for women holding public office.”

“We have issues with migration, economics, Brexit, but you should also take into account that there is another reality, which is positive progress of integration in Europe,” he said.

“So despite all the problems and challenges, our integration and unity are progressing.” Work between the UAE and the EU has progressed in the past couple of years, with a visa-waiver agreement, a rise in trade and cooperation in security, counter-terrorism and energy.

“The future of Europe isn’t something we inherit from our founding fathers and mothers,” said Federica Mogherini, EU high representative foreign affairs, in a Europe Day message from Brussels.

“It’s the values we live in and the partnerships we build. We are committed to stay together using the strength our unity gives us because only together can we face the challenges of our time.”​
420
Share FacebookTwitterWhatsAppPinterestEmail