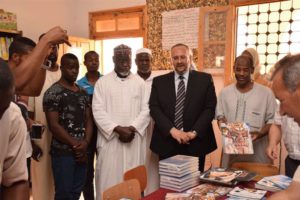 DUBAI, 8th May, 2017 (WAM) — In compliance with the directives of Vice President and Prime Minister and Ruler of Dubai, His Highness Sheikh Mohammed bin Rashid Al Maktoum, to establish 10 libraries in the name of Fatima Gholam the “Martyr of Knowledge,” who passed away as she was heading to participate in the final round of the Arab Reading Challenge in Algeria, the team started the first of the libraries in the deceased’s school in Adrar in South West Algeria.

The team also honoured the student’s family with the first position award in the Arab Reading Challenge in Algeria and an honorary certificate that immortalises her participation in the 2nd cycle of the challenge.

The Arab Reading Challenge, one of the Mohammed Bin Rashid Al Maktoum Global Initiatives, dedicated 3,000 books to the library which will serve 545 students in Belkin II Secondary School in Adrar, which is considered one of the best schools in the region. The books were shipped to the school in co-ordination with the Algerian Ministry of Education.

Speaking about the library, Najla Al Shamsi, Secretary-General of the Arab Reading Challenge, said, “The interaction of Vice President and Prime Minister and Ruler of Dubai, His Highness Sheikh Mohammed bin Rashid Al Maktoum after the news of the accident of the ‘Martyr of Knowledge’ and his directive to launch 10 libraries carrying her name, comes as an extension of his great efforts to spread the word and honour the pioneers of knowledge in the challenge. This accident with all the pain of loss it brought, has turned into a ray of light and hope for thousands of students to gain knowledge, which will immortalise the name of Fatima Gholam in the modern memory of Algeria.”

His Highness Sheikh Mohammed had praised the student and the people of Algeria as soon as news of the painful accident came to light, and said “as the word has readers, it also has martyrs,” giving the deceased the title of ‘’Martyr of Knowledge.”

The Arab Reading Challenge team will continue to work on nine other school libraries in Fatima’s name, in co-operation with the Algerian Ministry of National Education. Each library will be provided with a few thousand books according to its capacity and the numbers of students that will benefit from it.

This is part of the efforts aimed at strengthening the knowledge powers of Algerian students and encouraging them to participate in the Arab Reading Challenge in the upcoming cycles. The 2nd cycle of the challenge witnessed the participation of over 2,200,000 students.