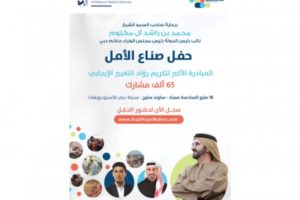 DUBAI, 9th May, 2017 (WAM) — Vice President, Prime Minister and Ruler of Dubai, His Highness Sheikh Mohammed bin Rashid Al Maktoum will honour the winner of the Arab Hope Makers initiative at a ceremony on May 18th at the Sound Stage in Dubai Studio City.

The Arab Hope Makers initiative aims to shed light on the inspirational stories of people who provide hope and spread it among communities throughout the Arab World. It seeks to honour them, highlight their achievements in society and reward their journey, which leads to contributing to social prosperity in a number of fields.

Arab Hope Makers initiative received over 65,000 submission from 22 countries. The ceremony will honour the greatest Hope Maker, who will be awarded AED1 million for his or her commitment to spreading hope.

Tickets to attend the award ceremony are available free of charge to those who wish to attend the event through registration at Arab Hope Makers website. Various distinguished dignitaries and representatives from local and regional media will attend the event.

Twenty-two Arab countries nominated people in their communities with the highest number of nominations coming from Egypt with 22.3 percent, followed by Saudi Arabia with 17 percent, the UAE with 10.9 percent, Jordan with 9 percent, Morocco with 6.5 percent, Palestine with 4.8 percent, Iraq with 4.5 percent, Syria with 4.4 percent, Algeria with 4.2 percent and Kuwait with 3.6 percent. The remaining 12.8 percent were distributed between Yemen, Lebanon, Sudan, Oman, Tunisia, Bahrain, Libya, Qatar, Mauritania, Somalia, Comoros and Djibouti.

Many of the submitted nominations revealed the stories of individuals who profoundly improve the lives of others in their communities. The stories also reveal the dire challenges that many people in the Arab World face, as well as the commitment and humanitarian spirit of others who generously give their time and effort to overcome these obstacles and spread optimism and hope.

Arab Hope Makers was launched under the umbrella of the Mohammed bin Rashid Global Initiatives, MBRGI, as part of the Year of Giving. The year 2017 was announced as #The Year of Giving by President His Highness Sheikh Khalifa bin Zayed Al Nahyan, and is in line with His Highness Sheikh Mohammed bin Rashid’s vision to create hope and optimism with the aim of instilling the values of goodness in the Arab World.