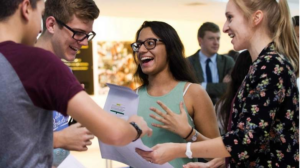 Students broke into tears of joy as they filled the halls of schools on Thursday morning, anxiously eager to see their IGCSE/GCSE results.

Despite concerns and pressure raised around the new grading system that replaced A*grading in Math and English with a number scale of 1-9, schools overall reported significantly higher results this year than last year.

Sri Lankan Manal Mohammed, 16, was the first student to pick up her scores at GEMS Wellington International School. She scored 5A* and 4As. “The new marking system did not pose challenges as the school had informed us about how it works, and there was constant follow up,” said Mohammed who plans to study medicine after finishing A-levels at Jumeirah College.

GEMS Education schools surpassed 2016 English national averages with a record number of over 1,750 students who sat for their IGCSE/GCSE exams. The standout performances included Jumeirah College whose students achieved an extraordinary 62 per cent of grades at A* to A, or the equivalent grades 9 to 7, under the new GCSE marking system. About 48 students received at least one grade 9 with eight gaining two.

Commenting on the results, Ruth Burke, Principal and CEO of GEMS Wellington International School, said this year’s results were the “best ever” at the GEMS Wellington School.

“As and A* were a range of 50 per cent, which means that all exams taken have been returned with either A or A*, which is significantly higher than last year,” said Burke.

Despite the challenges that the new grading system imposed Kings’ School Al Barsha that marked its first full set of GCSE results since opening in 2014, teachers and pupils were celebrating an excellent performance.

Only math was graded under the new system, and a total of 44 per cent of grades achieved at the school were A* to A, with the overall A*to C pass rate at 92 per cent.

Students’ performance was strong across all subjects but particularly in English Literature, Arabic and History, with 100 per cent of students attaining A*, A or B grades. Students also excelled in the fields of Drama and Science.

Michael Lambert, Headmaster of Dubai College pointed to the added pressure that the new grading system might impose. “Until recently students would strive to achieve as many A* grades as they could. Going forward there will be a desire to achieve as many 9s as possible despite the fact that grade 8s are equivalent to the old A* which is still a very significant achievement.”

Dubai British School, a Taaleem group school, celebrated a 100 per cent pass rate. A total of 80 per cent of achieved grades were “better than expected”, with 40 per cent of all grades being between A* and A. Of the 64 students, 10 have scored a full house of A*/A grades.

Brendon Fulton, principal of Dubai British School, said it has been another excellent year for GCSE students. “Although many were feeling quite anxious about the new subject specification and assessment criteria, their results show they have made outstanding progress,” he said.

Among the academy’s Emirati cohort was Eman Alameri who achieved 5A* and 4A. She is aiming to study corporate law at the London School of Economics or a US university after A-levels. “What a relief! I feel like a huge weight has been lifted off my shoulders,” she said.

What to do if you underperformed in your GCSE exams?

Ask for your paper to be remarked: If you feel that your examination has been wrongly graded, discuss the possibility of a re-mark with your school teacher. You will have to pay a fee, which will only be reimbursed if your grade changes.

Talk to the school about your options: Some schools have certain grade boundaries that you are expected to meet before you can take the subject at IB or A Level.

Resit the exam: GCSE exams can be retaken, although rules vary according to subject and exam boards. GCSE English Language and Maths may be retaken as early as November.

Do not despair. There are alternative pathways to university admission instead of A Levels.

You may consider pursuing vocational qualifications like the BTECs, which give the practical skills necessary to enter higher education or employment.