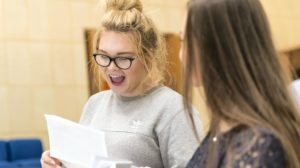 The system may have changed but many pupils scored higher than they expected, with some schools even achieving new highs

That fateful phrase, “turn your papers over class, your time starts now,” was almost like a distant memory for pupils who sat their exams weeks ago.

And with a new grading system in place, exam boards are bracing themselves for a surge in re-marking requests following a set of results predicted to be the most volatile in years.

Grade 9 is an A* and an 8 falls between an A and A* and a grade 1 is the equivalent of a G. There will be fewer grade 9 marks than A* awards under the previous system.

They may be the guinea pigs for the new marking system but many pupils this year had done well above their expectations.

Students at Dubai College were celebrating another set of fine GCSE results, taking the new grading system in their stride.

A grade 7 is the equivalent to the old A grade and 5s and 6s both straddle a B grade.

Of Dubai College pupils, 84 per cent achieved A* or A grades and 9 to 7 grades in this year’s examinations, an increase of 2 per cent on last year’s results, and a 5 per cent increase on 2015.

“We are delighted with this year’s GCSE results, which are testament to the dedication of the staff, the hard work of the students and the support of parents,” said headmaster Michael Lambert.

Brighton College Abu Dhabi proved to be the top-ranking British school in the capital.

Pupils at the school improved on last year’s record results, with 40 per cent of grades at A*, up from 37 per cent last year, and 63 per cent were either A* or A.

Eighty-eight per cent of pupils achieved grades between A* and B and no fewer than 10 pupils had A* or better.

Last week, pupils scored 43 per cent at grades A* to A at A-Level, 70.49 per cent of grades were between A* and B and 25 per cent of the year group achieved 3 A grades or above.

Headmaster Simon Corns said the results were an improvement on last year.

“We are very proud of the students, not least because they have also continued to contribute to the co-curricular life of the school,” he said.

“They have been outstanding role models for younger pupils and sterling ambassadors for the college and the UAE.”

This year, GEMS schools had a record number of teenagers – over 1,750 – who sat IGSCE/GCSE examinations, and 40 per cent of exams sat across all GEMS schools resulted in A* to A or equivalent grades.

Peter Davos, managing director at Hale Education Group consultants, said pupils who had not achieved the grades they had hoped for should not panic.

“There are alternative pathways to university admission and a successful career – instead of A levels, you may consider pursuing vocational qualifications,” he said.

“If you have just missed out on a grade and feel that your examination has been wrongly graded, discuss the possibility of a re-mark with your school teacher. You will have to pay a fee, which will only be reimbursed if your grade changes.”