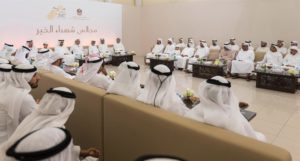 SHARJAH, 5th June, 2017 (WAM) — The second Ramadan Majlis organised by the Martyrs’ Families’ Affairs Office and the Higher National Committee for the ‘Year of Giving’ took place on Sunday evening in Wasit District Council in Sharjah with the attendance of the members of the UAE Cabinet and other senior officials.

This comes as part of a series of events organised in co-ordination with the General Secretariat of the Cabinet to the Ministry of Cabinet Affairs and the Future, and is dedicated to all the UAE heroes who bravely sacrificed their souls in the lines of duty, and to their families.

The Majlis commenced with the recitation of the Holy Quran by Yousuf Hamam Tayr, representing Algeria, and a contestant participating in this year’s edition of the Dubai International Holy Quran Award.

In his opening remarks, Sheikh Khalifa bin Tahnoun emphasised that the Ramadan Majlis reflects the vision of President His Highness Sheikh Khalifa bin Zayed Al Nahyan to provide continuous support to the martyrs’ families. He also highlighted the importance of maintaining direct contact between them, government figures, and the rest of the community. This comes within the framework of the ‘Year of Giving’ initiative dedicated to all the UAE heroes and their families.

Dr. Gargash said that the UAE, under the leadership of His Highness Sheikh Khalifa bin Zayed adopts a clear and consistent approach based on mutual respect, tolerance and moderation.

“The solidarity among the people of UAE and the leadership has been manifested time and again in the selfless sacrifice of the heroes to shield the country from any unlawful interference that may threaten its peace and security,” he added.

Gargash also said that “this has always been the approach adopted by the UAE since the founding of its union by the late Sheikh Zayed bin Sultan Al Nahyan, who instilled in the UAE society a culture of respect, giving, and extending a helping hand to any possible level whether health, education, or humanitarian.”

“The UAE is proud of its people and is aware that they are the true wealth of this nation. It spares no effort in supporting them and ensuring they lead a decent and prosperous life. Our youth, in particular, are a precious asset. They are our future and the torch-bearers of the UAE’s continuous prosperity,” he said.

He also addressed some of the UAE’s milestones in the humanitarian field, both regionally and internationally. He said that the country has always supported humanitarian causes and is the first to provide assistance to those in need, regardless of their culture, religion, or ethnicity. The international community has recognised this approach, and the UAE is positioned amongst the leading states in global positive outreach and humanitarian work.

The families expressed their appreciation of the Ramadan Majlis and thanked the leadership for maintaining close communication and providing all kinds of support.