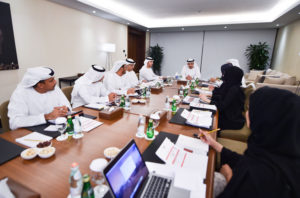 He started the meeting by welcoming the members of the council and went on to ratify the minutes of the 13th meeting of the Education and Human Resource Council.

He praised the efforts of the wise leadership in guaranteeing the readiness of the Abu Dhabi Vocational Education and Training Institute, ADVETI, to organise the World Skills Competition 2017 from 14th to 19th October 2017 in Abu Dhabi. This is in accordance with the best international systems that reflect the high capacities of the UAE in organising big international events.

He stressed that this competition is part of the wise leadership’s strategy to create specialised national skilled people in all fields to meet the demands of the nation’s future in the post-oil period.

Hussain bin Ibrahim Al Hammadi, Minister of Education, highlighted the preparations of ADVETI for organising World Skills 2017. He spoke about its role in enriching vocational education and the increase in the number of people affiliated with the institute to comply with the requirements of industrial projects and the labour market in the nation.

He emphasised the importance of the competition and informed that Abu Dhabi will host around 100,000 visitors. They will follow a group of youth and geniuses from all over the world at the Abu Dhabi National Exhibition Centre to compete in 51 technological and industrial skills representing over 70 countries, including leading nations in industry and economy. He added that the importance of these competitions lies in identifying the progress made by industries in each country in comparison to the most advanced countries in the world.

He said that the participation of Emirati youth in more than 31 specialised skills is significant and underlines citizen empowerment in addressing the most advanced developments in the field of technical and vocational skills, which have promoted the UAE’s position in international competitiveness. He cited the efforts of ADVETI in forming the Emirates’ skills team according to an international perspective that seeks to help them become competitive.

The Minister of Education said that this massive international event will have other positive outcomes. It will help achieve large economic, cultural and touristic proceeds, as the delegations participating in the competition are accompanied by around 10,000 visitors. It will also improve sustainability in the use of competition mechanisms and equipment in various educational institutions in the UAE that boost the development of the vocational education sector in the UAE.

Dr. Ahmad bin Abdulla Humaid Belhoul Al Falasi, Minister of State for Higher Education, demonstrated the higher education strategy for the year 2030. It is based on three main axes, which are innovation, elevation of the quality of education, and balancing the outputs of education with the needs of the work market.

He said that through these priorities, the Ministry of Education strives to guarantee the development of higher education institutions in the UAE and strengthen its ability to compete and excel on the international stage. It also seeks to adopt an encompassing course to assess quality in a continuous and consistent way and prepare graduates to get appropriate jobs through a set of necessary skills required to succeed in the work market.

He informed that national initiatives will be launched in this field to contribute in supporting the sector of higher education in the country.

Mohammed Taj Al Deen Al QadHi, Director-General of Sandooq Al Watan (The Nation’s Fund), presented an introductory demonstration in which he clarified the vision of the Fund. He also spoke about its strategy that strives to build a sustainable knowledge economy in the UAE in preparation for the post-oil stage.

He pointed out that the Fund’s efforts are focussed on four main fields that include discovering and developing national talents, giving professional direction and guidance, encouraging the development of commercial projects of social influence, and supporting applied research and innovations.

The demonstration also included an introductory summary of the first initiative of the Fund, “Our Future,” which will be launched on 18th June, 2016.

These gorgeous popsicles are made of frozen sewage because art

Prev Next 1 of 377
You cannot print contents of this website.