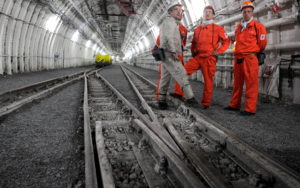 By Zeke Turner / BERLIN—Deserted coal mines, once left to gather dust, are glimpsing a new life in the age of solar panels and wind turbines.

The expanding fleet of renewable power sources world-wide means electricity is increasingly being produced when the weather allows rather than when it is needed most, creating the need to store power ahead of demand peaks.

Now, coal-mine companies in the U.S. and Germany are stepping in with a retrograde solution: turn their old mines into enormous power-storage systems, using century-old technology to keep the lights on when the weather doesn’t cooperate.

In Virginia, Dominion Energy Inc. D 0.07% and American Electric Power ’s AEP 0.10%Appalachian Power each are investigating adding a new power system in Virginia’s southwestern coalfield region. And in Germany, when coal producer RAG AG next year closes its last mine in the rust-belt state of North Rhine-Westphalia near the Dutch border, the company wants to see a power pack big enough for half a million homes fill the void stretching to 4,000 feet underground.

The retrofitting, the first of its kind according to its developers, would use a simple technology called pumped storage, which requires little more than two pools of water, one at the surface, another deep underground. The German project would cost €500 million, or about $560 million.

So far investors are balking at the price tag: Germany’s largest utilities RWE AG , E.ON SEand Uniper SE all said they aren’t interested. But the idea to resurrect coal mines as power systems is turning heads around the globe.

“The whole world, including China, is asking for regular progress reports,” according to André Niemann, an engineering expert at the University of Duisburg-Essen who designed and tested the system with a team of 50 researchers.

The idea is gaining steam among countries like South Africa, Australia, Belgium, France and Poland facing the same problems: what to do with old mines and how to add storage capacity to their electricity grids. Now both questions could have the same answer.

In the Prosper-Haniel mine in Bottrop, the pump would use excess power on windy and sunny days to spurt water up from a reservoir almost 2,000 feet below ground to a pool at the surface. If there is a shortage of sun or wind, the water is released to allow gravity to bring it back toward the bottom of the mine, turning a turbine along the way to make electricity.

How it could work

The majority of the costs come from boring a concrete-reinforced storage system underground that could hold 240 Olympic-size swimming pools worth of water.

In Virginia, a bill passed by the General Assembly and signed by Gov. Terry McAuliffe to take effect on July 1 would allow power companies building pumps near old coalfields to recoup their costs by raising energy prices.

The power companies AEP and Dominion are looking at options that could use a flooded coal mine or an open pit mine as one of the reservoirs.

“It’s way too early to provide a cost estimate,” said John Shepelwich, a spokesman for AEP.

David Botkins, a spokesman for Dominion, said the project is “in the infancy,” adding that a pump could help the surrounding grid as the company adds “a lot more solar in the future.”

Compared with other types of energy storage, the underground pump concept is expensive but designed to last longer than a chemical battery.

The cost of the German system is about €2,750 ($3,075) per kilowatt-hour. New Jersey-based Eos Energy Storage, a cutting-edge battery company, offers a storage system powered by zinc-hybrid batteries for $168 a kilowatt-hour that can last around 20 years, according to the company’s director of business development, Charles Russell.

“The advantage of pumped hydro is that it’s high capex, but it’s there for 100 years,” said Gerard Reid, a founding partner at Alexa Capital, a London-based corporate finance firm specializing in energy technology and infrastructure.

The engineer’s report described the pump as “long-lasting and virtually maintenance free.”

But there is another problem affecting all types of power-storage systems. Even if an investor fronted the money to build the pump, the low price of electricity on both sides of the Atlantic would make it difficult to turn a profit. For the pump to make money, it needs wide spreads in the wholesale power market, so it can buy power when prices are low and sell when prices are high.

Right now, wholesale electricity is cheap pretty much all the time.

In the U.S., it is an abundance of natural gas from the shale boom that has driven down electricity prices. In Germany, an oversupply of electricity—from government-subsidized renewable power sources and a fleet of coal plants that backs up the grid—has diluted prices.

Mr. Reid said the coal-mine pump concept would be hard to run profitably in such a market. “It’s absolute madness,” he said. “It’s a big white elephant that would never make money.”

Still, the idea has struck a chord, including with the public in what are often economically struggling regions.

In Virginia, the project would bring an economic boost to a part of the state that has been hard-hit by coal’s decline, said Hayes Framme, deputy secretary of commerce and trade in Mr. McAuliffe’s government.

Said Will Clear, finance manager for Virginia’s mining authority: “This is a real opportunity to build assets and create jobs.”

New Research Says Depression Is Not A Choice, It’s A Form Of Brain Damage

Study and diligence pay off for UAE’s top three pupils