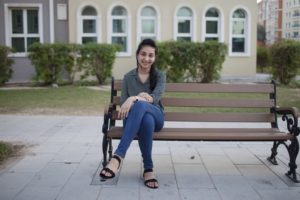 Study and diligence pay off for UAE’s top three pupils

Endless hours of study, mock tests and dedication paid off for three bright pupils who are celebrating near-perfect scores in their exams.

Dubai – The three have just received their grades in the Central Board of Secondary Education Grade 12 tests.

Delhi Private School’s Aiman Khan is believed to have achieved the highest grade in the UAE for humanities – 97.6 per cent.

Aiman, 17, said she was motivated to earn at least a 95 per cent to secure an academic scholarship at the university she planned to attend next year.

“I had this rigorous schedule every day,” the UAE-born Indian said. “I had to get up at 6.40 every morning and I had to sleep at 9pm.

“I rarely came out of my room – only for food or the washroom. I hardly went out anywhere.”

She found it hard to contain her excitement when she heard the news.

“I was completely not expecting this,” said Aiman, who planned to study international relations and cognitive psychology at a UAE university.

“I was screaming and my mum was crying on the phone.”

Rashmi Nandkeolyar, principal of Delhi Private School in Dubai, said yesterday’s result were the culmination of years of dedication to studies.

“This exam determines their placement in universities, particularly if they’re going back to India,” Ms Nandkeolyar said. “The cutoffs are very high and it is very difficult for them to get in if they don’t do well on this exam.

“Indians typically value this a lot. Even half a per cent makes a difference.”

Meghna Savit, 17, from Indian High School in Dubai, topped the science stream in the UAE with a score of 98.4 per cent.

Meghna studied for up to eight hours a day to get the results she needed.

“I’m surprised at the result but I was also confident after I did the exams so I’m really happy about the result,” she said.

To get the score she had to score high marks in five three-hour exams – physics, chemistry, mathematics, computer science and English – and complete three practical exams during the year.

“I had to get very organised about my revision and made sure I understood the concepts rather than learning everything by heart,” she said.

“I did about six to eight hours of studying a day for the exams and I’m so glad all that hard work paid off.”

She now plans to continue her studies in India. “My aim is to go into computer science engineering.”

In commerce, Smeet Prakashkumar Shah from Our Own English High School in Sharjah earned 98.2 per cent, the highest grade in the country for that stream.

“We are extremely delighted that our boys did well and congratulations to the entire community of teachers and parents who made this possible,” said Srivalsan Murugan, principal and chief executive of Our Own English High School Sharjah.

The exams were taken by more than 5,700 pupils across the UAE in March and last month.