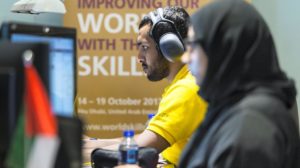 Salem Saleh decided to take his passion for mechanical engineering to the next level by participating in World Skills Abu Dhabi.

He had already considered a career in the field when he chose it as a major at university, but said participating in such a challenging skills competition would boost his job qualifications and value in the job market.

He hopes to open his own mechanics workshop and use the practical experience gained from the contest.
“If two people graduate from the same university, and one of them gets office ­experience and the other one from the field, the latter will be more desirable to be recruited,” said the Abu Dhabi Polytechnic student.

“From experience I know it has become tough to find a job, so if the person puts in more effort he stands a better chance.

“I have been training for seven hours every day for a year. In the beginning I did not feel it made a difference, but last week I saw the difference.”

For instance, a spare part that took him more than two hours to finish before, took only one hour last week.

His training included finishing practice exams in a busy office environment.
He and his peers spend about two weeks in Actvet’s office.

The company installed desktops for them to work on in the reception, so they could practise focusing and completing work on time, regardless of outside distractions.

He worked on the engineering of spare parts using Autocad, a program he said he had been interested in since school.

He previously participated in Emirates Skills 2016 and won third place.

Sulaiman Ahmed said he enrolled in World Skills to work on his weak points in web design.

“I am focusing on time management and upgrading my skills, because web design exists in universities in a standard manner, there are no highly advanced professionals,” the 21-year-old said. His brother took part in World Skills 2009, so Mr Ahmed decided he could benefit from the experience too.

“There is a big part of web design where we have to be creative, so it’s not just technical,” said Mr Ahmed, who has been training since April for at least eight hours a day.