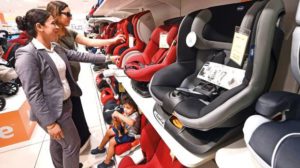 The UAE Cabinet approved a new set of specificationsand standards for car seats sold in the UAE.

Dubai: Child car seat dealers in the UAE have less than six months to comply with a new set of standards and regulations that will come into effect by the end of this year, Gulf News can confirm.

On Tuesday, the UAE Cabinet approved a new set of specifications and standards for car seats sold in the UAE.

Proposed and formulated by the Emirates Authority for Standardisation and Metrology (Esma), the approved standards conform to European Union and US standards.

The step follows the amendments to the Federal Traffic Law that made safety seats mandatory for children under the age of four. The new law came into effect on July 1.

According to Abdullah Al Muaini, director-general of Esma, the new set of standards will ensure toddlers are restrained in cars in compliance with the highest standards and in the best quality seats.

“We want to make sure people strap their children into the right kind of seats, that the seats carry out their purpose and that children are actually safe in them. Good quality seats are designed based on a specific science; they are not just pieces of plastic with some cushion,” said Al Muaini, elaborating that all child safety seats that don’t conform to Esma’s standards will be banned from sale from the end of this year.

The new regulations require car seats sold in the UAE to pass crash tests as well as have proper labelling and classifications for different age groups and weight categories.

“Our idea is to test all car seats imported in to the UAE and make sure they are up to the mark, particularly if there is an accident. The seats and their belts should be able to bear the impact of an accident and protect the child at a time when it matters the most,” he added.

He urged all manufacturers and importers of child safety seats to apply for Esma approval through the official website, www.esma.gov.ae.

“We have tied up with internationally accredited laboratories in different countries across the world and manufacturers and importers will get a list once they apply for approval. Import of seats will be allowed only if they pass a number of tests at our approved laboratories,” said Al Muaini.

The new regulations also require manufacturers to supply handbooks along with the seats that will provide clear instructions on the installation of the seat.

Al Muaini added that retailers will be required to demonstrate the installation procedure to their customers. The right product and the right procedures, he said, are key to child safety.

“According to statistics, many injuries to children are caused by having them wrongly strapped [into a child seat],” he explained.

“The move to standardise child car seats is another great step in the protection of children. Only proper products should be used, and Esma’s step will certainly prevent unfit products for our kids,” said Thomas Edelman, founder and managing director of RoadSafetyUAE, a leading traffic safety advocate in the country.

Edelman agreed with Al Muaini on the importance of correctly buckling up a child in the safety seat.

“Quality baby speciality stores have trained staff to assist with the installation. As more than 35 per cent of the car seats are wrongly installed, it’s important to have your seat checked regularly by the retailer you purchased it from,” he said.

Hamid Reza Ahmadi, CEO of Babykish General Trading, the sole distributor of child safety products manufactured by Graco in the Middle East and Africa, said that a child’s posture in the seat plays a critical role in ensuring its safety.

“Accident or no accident, a child should be safe in the seat and for this, the right seat, correctly installed, is important. The design of the seat is also important because it ensures the child is properly settled in, and is assuming the right posture. Neck protection is particularly important as it could get hurt even with a small impact,” said Ahmadi.

He urged consumers to seek professional help in learning how to install and buckle up a child in the seat.

How the child seat works

An infant car seat is designed to protect a child in the event of a crash by forming a protective cocoon.

The seats for newborns are placed facing rearward so that a child will be pushed in to the seat on front-impact and the shell and inlay protect the spine and vital parts of the child.

The seats belts restrain the child during the trip. They also strap the child in the safest position and hold them there in the event of a rear or side impact, just like the seat belts do for adults.

Child seats as per age and weight

Group 0 and Group 0+: Rear-facing infant carriers for children up to 10kg and up to 13kg, respectively (from birth to nine or 12 months).

Group 2 and 3: Full booster seats and cushions for children weighing 15kg to 25kg (about three-and-a-half years to six years) and from 22kg and to 36kg (about six years to 12 years).