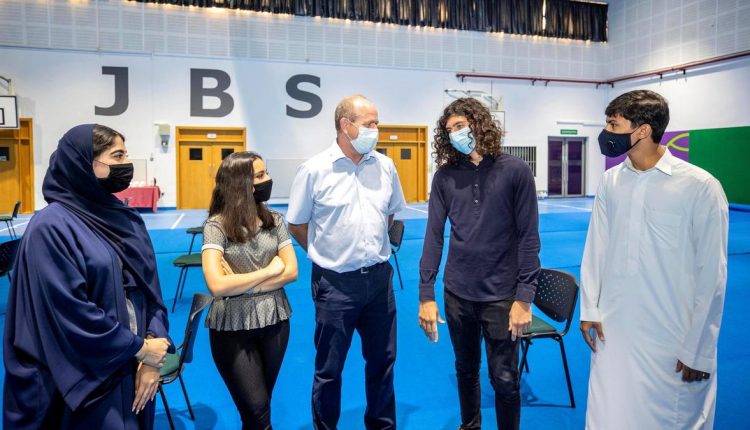 UAE pupils have achieved International Baccalaureate results higher than the global average with some pupils earning a perfect score.

Hundreds of teenagers across the Emirates received their IB results on Monday, earning an average of 32.80 points of the maximum of 45. Globally, the average was 29.90.

More than 170,000 pupils worldwide received their IB Diploma and Career-related programme results at the same time.

The exams had been scheduled for May but were cancelled because of the pandemic. Instead, pupils’ marks were calculated using internal school assessments and predicted grades from teachers.

Dr Siva Kumari, director general at the International Baccalaureate, said this year had been particularly challenging for pupils

Every IB graduate should be proud of their achievements, not just in reaching this milestone, but in the great flexibility and commitment they have shown in overcoming such obstacles

“An IB education has always been about more than results and, this year, pupils have had to deal with a level of global disruption that has never been experienced before,” she said.

“Every IB graduate should be proud of their achievements, not just in reaching this milestone, but in the great flexibility and commitment they have shown in overcoming such obstacles.”

Scott Moore, head of secondary at Uptown International School, said he was pleased with his school’s performance.

Of its 48 diploma candidates this year, one pupil, Abeer Ladhani, achieved the perfect score of 45.

“We are very pleased. Our average score is 32.5, which is above the world average,” he said.

“We had to submit pupils’ internal assessments and coursework.

“There is a little bit of an anticlimactic feeling as many pupils were looking forward to sitting the exams.”

Mr Moore advised pupils to contact the universities of their preference with their grades.

If pupils are not satisfied with their results, they have the options of appealing for them to be remarked or sitting the exams in November.

At Jumeira Baccalaureate School, pupils expressed mixed emotions as they stepped inside the building for the first time since the lockdown began in March.

“This is like my second home,” said Emirati pupil Rawan Khoori. “I know that I’m going to miss everyone here. It’s sad that life has to move forward.”

Ms Al Khoori, 18, decided to delay her move to the UK and will take courses remotely. She plans to follow in the footsteps of her grandfather and study architecture at the University of Manchester.

“Some people might be upset because they perform better in exams compared to classwork but for me, it just proved that all of the students are capable and they worked hard,” said Harry Sharpe, 19, from the UK but born in the Emirates.

The pandemic made Nour Fraijat, 18, determined to study abroad. She hopes to attend King’s College London to study history and economics.

“It’s made me want to go even more because I realised that there’s so much more to this world than we see here,” said Ms Fraijat, a Palestinian-Jordanian raised in the UAE.

“I was so relieved when I heard there were no exams because I was working from the beginning of the year and even though it was my last stretch, it was hectic and a lot of things were happening in the world.”

At Gems Education, 524 pupils waited for their IB results and scored an average of 34 this year. The average pass rate across all Gems schools was 94.5 per cent, above the world average of 77.8 per cent.

“We are incredibly proud of this year’s cohort of IB Diploma pupils and their results. Not only have they had to complete their secondary education in the most trying of circumstances, but they have also managed to collectively achieve our best ever IB Diploma results,” said David Fitzgerald, senior vice president at Gems Education.

At Dubai International Academy, Emirates Hills, 37 pupils achieved a score of 38 points or higher, and 89 per cent of the graduating class scored above 30.

Shamma Younus, an Emirati pupil at the school, was among the top achievers nationally.

She scored 41 points and will attend New York University Abu Dhabi with a full scholarship.

“I am delighted with the outcome of my IB results, and I’m glad to know that all of my efforts have come to fulfilment,” she said.