UAE Portrait of a Nation: After surviving cancer, NYU’s athletics head inspires the next generation

Peter Dicce swapped the courtrooms of Philadelphia for the football pitches of Saadiyat Island. 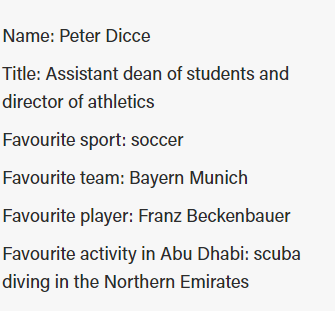 In 2009, a cancer diagnosis led Peter Dicce to reflect on his life.

He was 45, a successful trial lawyer and soccer coach but now felt at a crossroads.


“When you go through those situations, you reflect on what’s most important to you. And what made me most fulfilled was working with young people, coaching and sports,” he says.

“And the crazy way these things work, about 18 months later I was contacted.”

That contact came from NYUAD. The new university was seeking Mr Dicce’s advice on who to hire for its athletics programme. But he ended up in the position. Eight years on, Mr Dicce is loving life and work on Saadiyat as assistant dean of students and director of athletics.

It’s been eight years of hard work and long hours establishing an athletics programme, building a university league, coaching NYUAD soccer teams and changing the landscape here from club to university-based sports. “And most importantly, giving women an opportunity to participate,” he said.

But before that fateful call however, a move to the Middle East had seemed unlikely. Mr Dicce was born in Long Island, went to law school in California. By 1990 he was working as a trial lawyer. It was a competitive world and case followed case as Mr Dicce applied the rules of the soccer field to the courtrooms of Philadelphia. “You go out and play a game, look at the scoreboard, and move that into a courtoom. And the jury tells me did I win or did I lose.”

But why not pick baseball or football? Mr Dicce’s grandfather was an immigrant from Germany and in the 1970s would read the German newspapers to him.

“He would talk to me about Bayern Munich, Franz Beckenbauer and all the great players coming through.” West Germany won the World Cup in 1975, Mr Dicce became a life-long Bayern fan and those talks inspired his life-long dedication to soccer. “That lit the fire for me for soccer early on. I started playing and I haven’t stopped playing since.

On the sidelines of case work, Mr Dicce also found the time to coach US regional, state and college teams.

“I have a wonderful wife who describes soccer as the mistress in the relationship as I’m always running off to do that,” he says.

Mr Dicce landed in the UAE in 2010. The Saadiyat campus would not open for another four years and sports were then played at Zayed Sports City and the Armed Forces Officers Club.

He recalls the heady atmosphere surrounding the fledgling university.

“We had a temporary campus but no specifics. We knew there was something out there [Saadiyat] but we didn’t know exactly what it was,” he says.

“You had to take that leap of faith and we took it together. But there was the warmth of the people I met and an excitement about what the future would hold.”

Training was moved to Al Muna – a primary school within walking distance of the Sama Tower campus on Electra Street. The field was only large enough for a five-a-side but it became a home and inculcated a spirit of friendship among NYUAD staff and students.

By 2014, the campus had moved to Saadiyat. Al Muna had served its purpose but now the university had world-class facilities.

“From a soccer perspective, we have 30 players from 25 countries – they all play but view it should be played differently. So me, being an American where we haven’t figured out our style yet — I’d say — listen guys, here is our system and can I get everyone to buy in?”

The culture of the locker room and ideas of toxic masculinity are also something Mr Dicce is keen to discuss. The locker room he grew up in is different to the one that exists now.

“We try to move away from feeling you have to be the toughest or strongest. Everyone has gifts to bring.”

He’s also been involved with the establishment of an athletics league for women in collaboration with other universities. The Abu Dhabi inter-university sports league was established in 2011, the games are hosted at Zayed University and there is also an alumni team to encourage them to continue play. “They need a culturally appropriate environment with female referees, coaches, administrators.”

Coach Dicce has seen off cancer, and as the university term winds to a close before the summer, he isn’t easing up in the race to improve the lives of young people.

“I feel I’m making a true difference in the lives of some young people.”