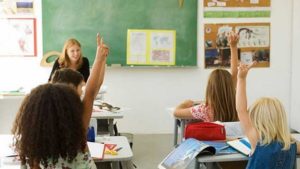 The desire to learn English can sometimes dominate and parents should not lose sight of the importance of maintaining the home language to support in future development and learning.

English is the main language in private schools across the UAE. As one of the most cosmopolitan countries in the world, it is no surprise that students from non-English speaking countries join these schools. But how do teachers help these students adapt to the language?

Mattia was one of those non-English speaking students who moved to Dubai with his parents. He moved here from Italy with no English language speaking, writing or reading skills. He was struggling to communicate freely with everyone at his new school and knew only a few introductory words.

However, his teachers used several different techniques to help learn the language, including allowing him to use digital translators in class and giving him extra time to finish his exams.

The teachers at Greenfield Community School gave Mattia one-on-one support from the specialist English Additional Language (EAL) teacher and he was accompanied by the EAL teacher assistant to his other core subjects such as Science, English, Mathematics and Humanities.

“In school, he was given extra time in the completion of his tasks and assessments including his examinations. For Mattia, there was a heavy reliance on his device for translation. Furthermore, in collaboration with his subject teachers, he was also allowed to be exempted from certain classes to obtain help in the school library to facilitate the learning of more complex vocabulary,” Dolores Allison, EAL teacher at Greenfield Community, told Khaleej Times.

“By January, he was already fluent in the spoken language and by the end of the academic year, his cognitive development was sound for further scaffolding. He now confidently expresses himself in a variety of contexts using more demanding vocabulary to make himself even more comprehensible. He often injects what he communicates with a large degree of humour. Now he can sustain himself on a day-to-day basis independently.”

Other schools are also using similar techniques to help students as such and are also providing ample one-on-one time with dedicated teachers who are helping students with the English language.

“Over the course of that first month and the following months, the student was pulled out of regular class instruction for English language support for two hours every day. Within a month, she was happy to be in school, starting to regularly participate and contribute to class discussions,” Radojkovich said. “By the second half of the academic year, she was starting to support other students in the group and she is now receiving less than an hour a day and by December she will not need to receive pull-out support anymore.

The school also involves parents when it comes to helping their children learn the English language. Radojkovich said students often find the motivation to learn another language from their own parents.

He said parents can also help their children in different ways at home. “The desire to learn English can sometimes dominate and parents should not lose sight of the importance of maintaining the home language to support in future development and learning. Similarly, instilling confidence and encouragement are vital to support a child in all areas of learning, not just language.

“Also, inviting children to practise English in some small low-stress ways, such as writing a grocery list, looking for answers to things online or translating things for their younger siblings are all good strategies. Most importantly, understanding that learning a language takes time and to celebrate small wins as well as big gains.”

Parents of English Language Learners (ELL) are also invited to coffee mornings at the school to create home-school partnerships. The school follows a strategy that embodies a school culture that welcomes and honours other languages, which makes parents and students “feel comfortable”.