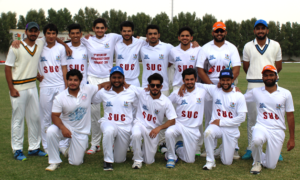 The final score of the match ended at: SUC 133/9 and ZABIST 118. Man of the Match in the Finals award went to Afsan of SUC and the Player of the Tournament was awarded to Khalid Shah of SUC. A tou

SUC cricket teams winning streaks over the past years have carved a mark in the cricket sport throughout the country. Their commendable and unwavering passion to the sports led them to own their rightful title for pushing themselves thrice as hard during trainings and practices.

A Day of Giving at SUC for Children with Special Needs