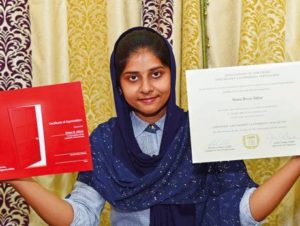 Sharjah: Record-setting Sharjah girl Sitara Brooj Akbar now has another feather in her cap, becoming the youngest Certified Anti-Money Laundering Specialist (CAMS) at the age of 17.

The Pakistani teen had stepped into the limelight as an 11-year-old when she became the then youngest person to pass five subjects in O-Levels (formally called IGCSE in the UK education system) in 2011.

The CAMS is normally the reserve of seasoned bankers and law enforcement agents skilled in fighting serious financial crime, such as terrorism funding. The qualification is provided by the US-based Association of Certified Anti-Money Laundering Specialists.

Sitara is interested in international cooperation and financial issues and wanted to equip herself with expertise in something that tied the two together.

“Money laundering and terrorist financing are two of the biggest problems we face right now. Times and conditions keep changing and if you don’t keep your aim towards the future, you will lag behind. So I thought that, since these are the two current issues, I should know how these problems arise and how I can solve them. This [CAMS] was particularly of interest to me as it’s mostly about international law and cooperation; you can say I hold a vested interest in international relations and politics,” she added.

Sitara studied for the CAMS exam on her own, like she has done for all her academic pursuits. Sitara had to leave school in Pakistan when she was in grade one and never looked back. She was progressing too quickly for her age but her teachers thought, ironically, she was not interested in studies.

“There wasn’t anything for me to do in school anymore. Every other day, the teachers would call my parents and say ‘she doesn’t study much’ and ‘she’s not a good girl’, because once I would study something — let’s say ABCs — I would say ‘I don’t want to do this anymore’.”

Her father, Mohammad Akbar Phutta, decided to open a school for Sitara and other children but teachers there also could not keep up with her. He said students like Sitara need specialised mentoring that was not available in their small town, in Chiniot district of Punjab province.

Determined to prove herself, Sitara studied at home and went on to ace her O-Levels and also sat her A-Levels when she was only 13. In 2015, Sitara also became the youngest pupil to clinch the highest level, Band 9, in the International English Language Testing System (IELTS), when she was just 15.

However, she could not enrol in university abroad because of problems in securing a student visa, as she was too young. In 2015, the family moved to the UAE, where Sitara also faced university admission problems because she does not have a school-leaving certificate.

“Well, I have one from my prep-school but I don’t think that counts,” she joked.

Sitara, who could not become a school or college student, turned teacher to her four younger siblings, who also do not go to school. He father said the all the children are home-schooled and already studying O-Level coursework.

In her free time, Sitara sometimes also gives pointers to candidates at the Future Target Institute in Dubai, which is licensed to provide training in courses such as IELTS and English as a second language. The institute is run by her mother, who used to be a chemistry teacher in Pakistan.

Sitara also does community work as the Youth Ambassador for the Pakistan Association Dubai.

The wonder girl is about to embark on her next challenge, pursuing a biochemistry honours degree at De Montfort University in Leicester, UK, in September. After the appointment of a legal guardian for her in the UK, she can finally start a formal higher education.

“I wanted to become a scientist since I was six… I feel for the people who are suffering from diseases that cannot be cured right now. I want to find, maybe, the cure for some of the diseases; I want to serve humanity in any way that I can,” Sitara said.