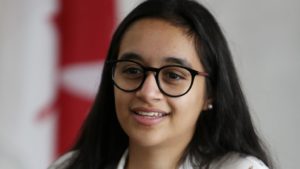 She wants to be the first Emirati in space and to plant the UAE flag on the surface of Mars.

And on Monday, 15-year-old Alia Al Mansoori will get her first taste of what that involves when a Falcon 9 rocket blasts off from the world-famous Kennedy Space Centre in Florida.

Alia will not be on board but her work will be. The Dragon capsule on the SpaceX ship carries her winning experiment from The National’s Genes in Space competition.

Alia and her family will be watching the lift-off at the Nasa complex as guests of Boeing, sponsors of the nationwide contest.

The capsule will carry her experiment to the International Space Station, where it will be tested by one of the astronauts on board.

Last week, Alia was at Harvard University to help prepare her experiment for its voyage into orbit.

Her winning entry uses ribonucleic acid (RNA), a molecule that, like DNA, is key part of all living things.

Samples of RNA will be tested on board the ISS in a specially adapted version of a machine called a miniPCR DNA Discovery System.

She hopes to see if the samples, taken from Nemitode worms, behave differently in space than on Earth, something that could prove vital for long-distance space travel, which Alia hopes to experience.

The samples, packed into several dozen small vials, have been deep frozen and packed in dry ice before being sent to the space centre.

Alia’s terrestrial  journey has been an amazing one since winning the competition.

She has meet Sheikh Mohamed bin Zayed, Crown Prince of Abu Dhabi and Deputy Supreme Commander of the Armed Forces, is training to be an ambassador for Expo 2020 and has visited Canada to explore further education options in her chose fields of molecular biology and medicine.

The Genes in Space contest attracted more than 100 entries and aims to promote interest in science in UAE schools.

Alia, a pupil at Al Mawakeb school, says: “I’ve always wanted to be an astronaut. When I go to Mars, hopefully I will be taking the UAE flag with me.”

The launch on Monday is a resupply mission for the ISS and takes place in the same complex where Apollo 11 left for the Moon in 1969 and was later used for Space Shuttle missions.

It will use a commercial rocket built by SpaceX, the company created by billionaire Elon Musk, who is also behind Tesla electric cars.

The Falcon 9 is one of the most sophisticated rockets ever built and is able to land the first stage under its own power for reuse, rather than falling into the sea, like other rockets.

Monday’s launch has been delayed several times but was finally cleared by Nasa on Thursday after a successful test of the nine Merlin main engines.

Ten minutes after lift-off, the first stage of the rocket will land back at the Cape Canaveral Air Force Station.

The Dragon capsule will continue into orbit for a rendezvous with the ISS early on Wednesday morning. Astronauts will use a robotic arm to capture the capsule, which will remain docked with the space station until its return to Earth in September.

This will be the 12th mission conducted by SpaceX for its contract with Nasa and will carry dozens of scientific experiments alongside Alia’s, as well as supplies and equipment.

Other experiments include growing vegetables in space and medical research. Alia’s experiment will eventually be returned to Earth for evaluation, although no date has been set yet.

Emiratis urged to sign up for long-term health study