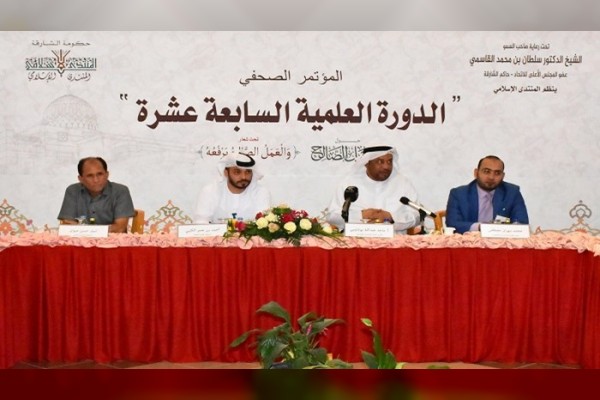 SHARJAH — The activities of the 17th Science Festival, organised by the Sharjah Islamic Forum at the Al Maghfira Mosque, under the theme, “Good Work”, will be launched on 8th July, under the patronage of H.H. Dr. Sheikh Sultan bin Mohammed Al Qasimi, Supreme Council Member and Ruler of Sharjah.

The festival, which will run until 18th July, will include scientific programmes, legal lessons and talks on Islamic culture, to strengthen the minds of members of the community who can participate in discussions on serious legal and scientific topics, which will include the components and elements of good work, and how to enrich levels of knowledge and create the correct scientific environment.

During a press conference that was held today at the headquarters of the Forum, Majid Bushlaibi, Secretary-General of the Sharjah Islamic Forum and Chairman of the Supreme Committee of the Science Festival, said that this year’s Science Festival will handle important topics related to the subject of good work, including highlighting the value of good work to the community, in order to elevate the people and the country, providing Muslims with examples of good work in the Holy Quran and the Prophetic Tradition, as well as discussing the subjects of purification and morals and connecting them with good work.

Bushlaibi explained that the festival will also include the topic of promoting the value of good work and its role in community development, especially to coincide with the Year of Giving, while spreading the culture of goodness, in terms of community giving and the coexistence of its members. The festival will also set the principles of how to purify souls, from the acceptance of its imperfection to its elevation to Allah Almighty.

He praised the support, monitoring and patronage of the Ruler of Sharjah for the Science Festival as a major encouragement for achieving greater success, excellence and perfection, to strengthen the principles of a tolerant Islamic culture, until the festival can become a scientific example of Sharjah’s culture and knowledge, which aims to abolish the darkness of ignorance with knowledge and enlightened education.

He pointed out that the theme of this year’s cycle, “Good Work”, represents and matches the support and directives of the UAE’s leadership to make 2017 the Year of Giving, as well as a balance of work that distinguishes between acceptance and being good. He also stressed that 80 students from Al Qasimia University in Sharjah will participate in the festival, as well as university students from outside the country.

Mohammed Mahran, Chief of the Studies and Research Section of the Forum, explained that scientific discussions will be broadcast through the media channel of the Sharjah Islamic Forum website, as well as through social media.