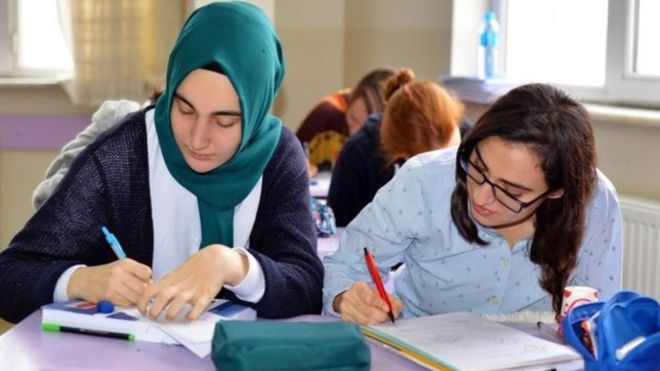 School league tables: See how your secondary school has done

More than one in eight secondary schools in England is below the standard deemed acceptable by ministers, league table data shows.

The secondary school league tables have just been published, featuring the results of the first pupils to sit new, tougher GCSEs in English and maths.

The tables allow parents and pupils to compare the local schools’ results.

Schools are judged by two new measures, Progress 8 and Attainment 8.

The data shows how many schools have missed the government’s floor standard of -0.5 in Progress 8 in last summer’s GCSEs.

There are significant regional variations, with London having the lowest proportion of under-performing schools at 6.9% and the North East the highest at 20.9%.

The tables use raw GCSE results from last year and a raft of data from the Department for Education to evaluate how well pupils progress in a school.

Both Progress 8 and Attainment 8 focus on the results of a pupil’s best eight GCSE results including English and maths.

In schools where pupils failed to progress to the expected level (-0.5 or below in Progress 8), they were getting around half a GCSE grade worse than they could have done, based on end of primary school results.

In total, 365 schools – with some 47,342 pupils sitting GCSEs last year – did not make the required progress.

Last summer, teenagers sat new, tougher GCSEs in English and maths, which were graded 9 to 1 (9 being the top grade). All other GCSEs are graded under the old-style alphabetical system.

Pupils are considered to have passed the new exams if they achieved a grade 4 or above – equivalent to the old C, but schools are judged on a grade 5.

This has led to some confusion and disquiet, with schools and individual pupils effectively being judged by different standards.

The DfE said: “More schools are below the floor in 2017 because the distribution of Progress 8 scores changed. There were more schools that achieved both very negative and very positive scores in 2017 than 2016.”

The schools with the biggest drop in results, once grade 5 was used to measure standards, tend to have much higher proportions of disadvantaged children. In fact the bottom 10% of schools had an average of 38.4% disadvantaged students.

Notably, the percentage achieving grade 4 or above in English and maths is stable compared to last year.

Schools minister Nick Gibb said teachers and pupils had been responding well to the new more rigorous curriculum introduced by the government.

“Academic standards are rising in our schools thanks to our reforms and the hard work of teachers.

“Today’s results reinforce this success, with teachers and pupils responding well to the new more rigorous curriculum introduced by this government.

Geoff Barton, general secretary of the Association of School and College Leaders, said the secondary school performance tables could not be compared with previous years because the government had “once again moved the goalposts”.

Attainment 8 scores by area in England

Tap or click to explore Attainment 8 and Progress 8 scores in your area. 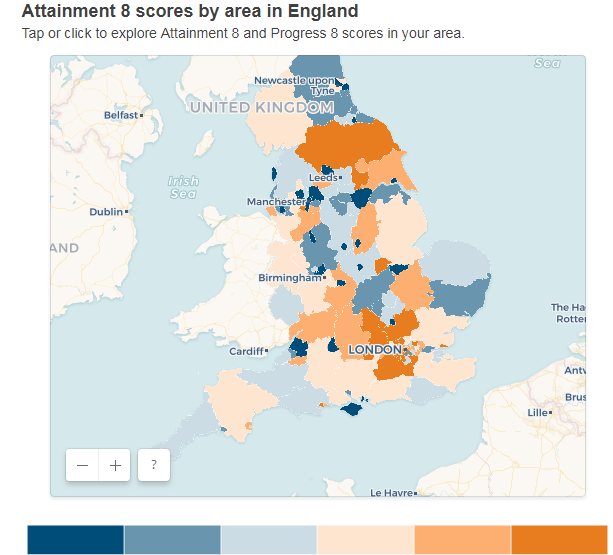 Map created with Carto. If you are unable to see the map on your device, click here

He added that the mix of grading systems had complicated and changed the way the headline measures are worked out.

“As the DfE itself says in today’s statistics, these changes are the main reason why there has been an increase in the number of schools which are deemed to be below the ‘floor standard’ for Progress 8.

“It is extremely unfair that more schools find themselves in this situation because of complex changes to the way in which this is calculated.”

He said it was “very frustrating” that the bar for achievement in English and maths has been raised arbitrarily to a grade 5 under the new system – which is higher than the old standard of grade C.

“And it is potentially baffling for parents and employers that schools are now judged on grade 5 – described as a ‘strong pass’ – while grade 4 is good enough to be deemed a ‘standard pass’.”

Mr Barton said the tables revealed only a limited amount about the true quality of a school in a system undergoing significant change.

The DfE has made clear that there is no automatic consequence to being below the floor or coasting.

It said: “Where a school has fallen below these standards for the first time in 2017, the data will be a starting point for a conversation about school improvement.”

Learning and Teaching Geography Through a Digital Lens