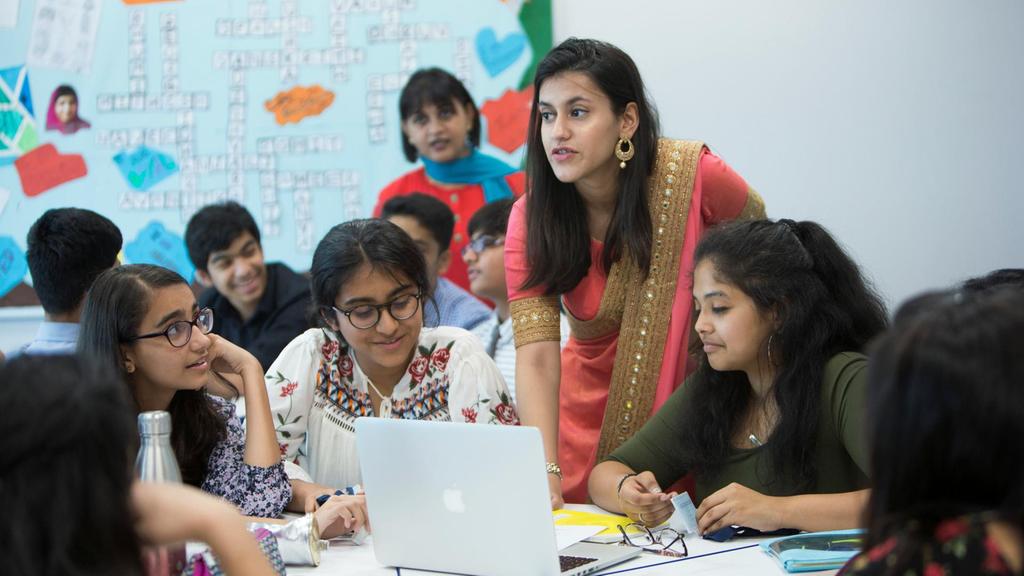 Pupils turn teachers for the day for education celebration

Teenagers use magic boxes and have discussions on Netflix shows to inject creativity into classrooms.

Pupils turned teachers for the day to help celebrate the efforts of UAE educators.

Learners at Gems Modern Academy in Dubai marked Teachers Day, held every September 5 in India, by offering a unique twist on the lesson plan.

Grade 11 pupils at the Indian curriculum school swapped roles to teach younger children, using modern influences such as references to Netflix shows to get across their points.


The school has been running the competition since 2001.

After the first round, the children are shortlisted for a second round based on their performances. The pupils incorporate technology and data to teach the classes which follows the lesson plan created by the teacher.

After round three, two pupils are crowned the winners and their names go on the honour board.

Nargish Khambatta, principal at Dubai Modern Academy in Nad Al Sheba, believes the competition “gives pupils an opportunity to get under the skin of the role of the teacher and to understand what it means to be a teacher.”

“It gives them an opportunity to come out of their comfort zones. They’re not used to speaking in front of a class,” she said.

A total of 130 pupils from grade 11 took in the competition this year, in which the temporary teachers don suits and traditional Indian sarees.

“They teach English, mathematics, computers and science but the best lessons are in music. They teach the pupils about the history of jazz and about The Beatles,” she said.

There were no barriers to taking part, as a pupil who has cerebral palsy taught a class with the help of an education technology tool, while a girl who has auditory impairment also led lessons.

“Rap is something I’m passionate about and I thought if I’m having fun, everyone else would have fun,” said Aryan.

“The experience was great but planning the lesson was hectic. It gave us an insight into what our teachers do and the stress they go through.

“When I went to the class, the children were way smarter than I expected them to be. They understood concepts like the themes of poetry in minutes. I had to improvise otherwise my lesson would get over very fast.”

Isha Lingawar, a 16-year-old pupil at the school who won the competition last year, had been looking forward to it for five years after seeing her sister participate in it.

The pupil taught physics to grade seven pupils but added a twist by using a magic box to teach reflection, mirrors to hide objects and a game round to pique the interest of pupils.

Isha requested the pupils to prepare some material ahead the class, but only two pupils studied the portion.

“We still went through the whole lesson. It taught me the importance of homework and preparing ahead of class,” she said.

“I was nervous at the beginning as I had to speak in front of 20 pupils. We used an online quiz and an animated video,” he said.

For the pupil, who is considering becoming an economics professor, it was important that the pupils participate actively.

Arisma Arora is passionate about biology and wanted to change the popular opinion that biology is boring through her class.

She used online tools and a Netflix show on genetics to explain concepts to the pupils.

“We never think of how teachers have to improvise on the day as so many problems happen at the last minute,” said the pupil.