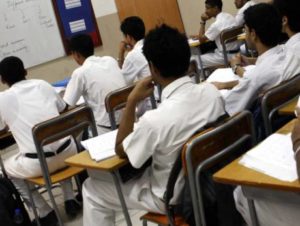 Preschool to university of one child costs Dh1m for UAE parents

These costs exclude other expenses such as books, trips and uniforms that would be another 40%: Study

The study estimated the cost of education of a child till university at Dh938,599 as of last year.

The cost facing UAE-based parents for educating one child from preschool to university has been estimated, for the second year in a row, at close to Dh1 million.

Zurich – Middle East, which also estimated the cost last year, on Wednesday put the figure at Dh938,599 — around 0.5 per cent higher than last year.

In the UAE, pre, primary and secondary school costs add up to an average of Dh528,486 per child, a slight increase on last year’s figures. These costs exclude other expenses such as books, trips and uniforms, which could increase by up to 40 per cent for top-tier schools.

Walter Jopp, CEO of Zurich – Middle East, said, “When it comes to education — as this research shows — it is important to start planning early to ensure enough capital is available when your child is ready to start university. Adopting a long-term approach to savings could help fund the best education for your child without worrying about the cost.” The research also shows that “parents would do anything to fund their child’s education, including sacrificing their retirement fund and other lifetime goals to pay for tuition fees”.

Building on the insight, Zurich – Middle East spoke with a number of UAE students to find out what professions they would like to pursue, and the costs of associated university courses in the UK and the US. Top five professions included medicine, computer science, business and management, finance and accounting, and engineering.

Parents in the UAE are the world’s biggest spenders on their children’s university studies, paying $18,360 (around Dh67,439) annually on average, according to The Value of Education: Foundations for the Future report by HSBC bank last August. The figure represents a 140 per cent higher spending against the global average of $7,631 (around Dh28,029) per year.

According to a separate study by the Institute of International Education, students studying in universities within the UAE spend $13,827 (Dh50,788) per year on average.