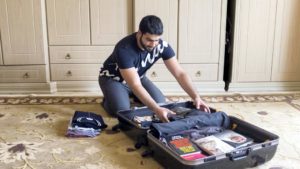 “There is only one barrier, once you go through this barrier, you will be so happy,’ says student Omar Al Ansari

Emiratis studying in the United States say the turbulent politics playing out on daily newscasts is far removed from their lives on campus.

“The thing with the US is that it’s so big – each state is independent when it comes to safety and these types of things,” said Omar Al Ansari, a 22-year-old from Sharjah studying industrial engineering at Arizona State University – Tempe.

“So you feel that you are really disconnected with what you hear on the media. In Arizona, where I study, there isn’t such things because it’s a small town with a lot of students, you don’t get that feeling a lot. Maybe you can feel it a little bit, but not too much.”

Although it is true that he has come across some Americans who are initially cautious upon meeting a foreigner, Mr Al Ansari said the experience is always easily smoothed over through conversation.

“In general, the Americans as so welcoming,” said Mr Al Ansari, who will graduate in December. “There is only one barrier, once you go through this barrier, you will be so happy. The barrier is the wariness – it’s unlike Canada, in which the Canadians are more tolerant – Americans have a big issue with the security. So Americans kind of fear – the first impression is they don’t want to go with you unless they know you a little bit.”

For Mr Al Ansari, the best way to prove himself to his American peers was to run for student government. It worked. He was among the 20 student senators elected to office this year.

“From that student government, I kind of built up my network and got involved with the American culture,” said Mr Al Ansari.

Mr Al Ansari said he often invokes the UAE to help introduce himself to others.

“They say, ‘What’s the UAE?’ They usually know it as Dubai. So, I say to them, ‘It’s mostly known by most people as Dubai. Dubai is one emirate in the United Arab Emirates, and then I begin the conversation, and then just things become more flexible.”

Aya Al Hamoodi, a 20-year-old sophomore at the University of California, Berkeley, said the campus community has been very supportive and welcoming of international students.

“If anything, people will just not know about the Arab world and then ask, but it’s never anything offensive.

For Ms Al Hamoodi, the experience of studying in the United States in the era of Trump is a life lesson she will never forget.

“It’s crazy because I can’t believe – like, this is going to be in history books and I was living there at that time. It’s really strange but I think if anything it’s a good time to be there because if there is ever a time to promote change and promote something positive, it’s probably now,” said Ms Al Hamoodi, who is from Abu Dhabi.

“Even with everything going on, I would encourage students to go [to the US] because it’s a really, really great opportunity. It provides you with not just your degree, but so many experiences that are going to help you become a better, stronger person, more ready for the real world.

“And right now, I mean the UAE isn’t affected by all of Trump’s crazy policies. I would say take advantage of the opportunity we have right now. No one knows what is going to happen in the future, but right now it’s good, we’re OK.”

Preschool to university of one child costs Dh1m for UAE parents