26th April 2016, Abu Dhabi, United Arab Emirates – Teams from American University in Dubai, Ajman University of Science and Technology and Khalifa University of Science, Technology and Research (KUSTAR) swept to victory today in Abu Dhabi, in Microsoft’s Imagine Cup 2016, a student contest for the world’s up-and-coming innovators. The event was held in partnership with Al-Bayt Mitwahid, an association established by employees of the Crown Prince Court (CPC) of His Highness Sheikh Mohamed bin Zayed Al Nahyan, Crown Prince of Abu Dhabi and Deputy Supreme Commander of the Armed Forces. 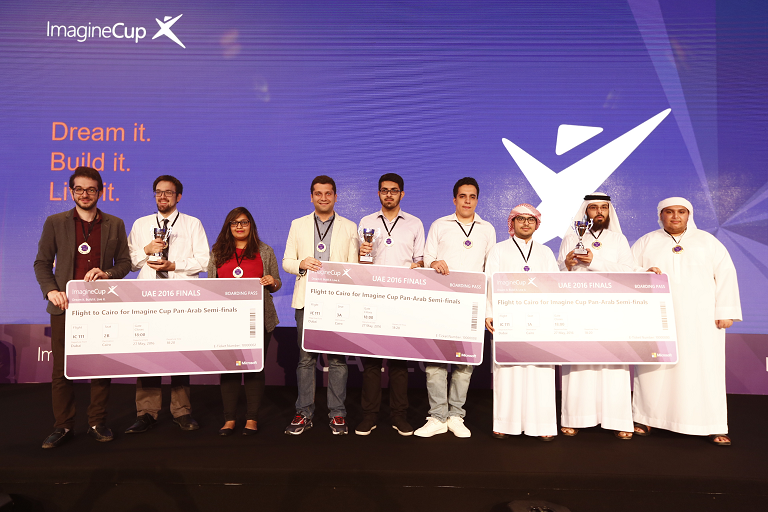 Microsoft received 173 proposals this year from UAE entrants – an all-time record in the Gulf region since the competition was launched in 2003. Twenty-six of these were in the Games category, 68 in Innovation and 79 in World Citizenship.

In the World Citizenship category, the Avengineers team from American University in Dubai, took first place with its Halcyon project, which was aimed at providing support for early-stage Alzheimer patients and their caregivers. Second prize in the group went to DAQS, from New York University Abu Dhabi for its Dual Air Quality Systems concept, which used electrochemical sensors on buses and bus stops to create an interactive map showing colour-coded indicators of pollutant levels across the city. In third place was American University in Dubai’s Illumination squad and its Walking-Pal Assistive Blind Technology, based on intelligent software integrated into a pair of glasses.

The Innovation class awarded the winner’s slot to Darma of Ajman University of Science and Technology. Its Quick Shopping idea involved a smart shopping-cart that automatically identifies content without human intervention. Second was Foresight, from the American University in Dubai, for its work on Glaza, a telepresence device that provides users with real-time stereoscopic renderings of major tourist attractions around the world. In third place was SecureME, from Ajman University of Science and Technology. The team devised an Airport Luggage Protection System to ensure that the right baggage reaches the right passenger.

In Games, Klockwork, from Khalifa University of Science, Technology and Research (KUSTAR), took first prize with Magus Dream, a multiplatform game focusing on the story of a young man’s quest to become a master of magic, allowing players the choice of whether to become a hero or a villain during their journey to power. Second prize went to B.A.S.S., of University of Wollongong in Dubai, for Heat Escape, a hand-painted 2D platformer that follows the path of heat energy from its source, until it escapes the planet’s atmosphere, and how this process has changed over the years. In third place was The Arcturus, from Higher Colleges of Technology, for its Outdoor Adventure. The game makes use of Microsoft’s HoloLens augmented-reality headset to craft an experience that encourages children to play outdoors.

The UAE finals, held at the Ritz Carlton, Abu Dhabi on 26 April, marked the 14th year of the Imagine Cup, which has come to form a pivotal part of Microsoft’s YouthSpark programme, a global CSR initiative, launched in 2012, aimed at delivering educational, employment and entrepreneurial opportunities for more than 300 million young people around the world.

Microsoft’s Imagine Cup challenges entrants, who must be 16 years or older or enrolled as a permanent student, to collaborate in teams and submit imaginative ideas in the field of technology. Competitors need to develop the concepts from scratch and defend their usability and market draw to a panel of judges.

Competing teams had the option to enter one of three categories in the Imagine Cup. Five finalists were shortlisted from each category to compete in Abu Dhabi, and from these finalists, Microsoft’s judges selected a first, second and third place in each category. As winners of their respective categories, Avengineers, Darma and Klockwork have qualified to compete in the Imagine Cup Pan-Arab semifinals to be held in Egypt in May.

“Developing youth capacities such as the ability to innovate is integral to the continued development and prosperity of this country,” said Mohamed Al Qadhi, vice chairman, Al Bayt Mitwahid Association. “It is vital that we engender in them a strong sense of imagination and talent for solving problems. Competitions like this allow our young people to hone their confidence, so they can come to the table with fresh ideas.”

“Our support for Imagine Cup echoes our commitment towards promoting STEM education and nurturing innovation amongst youth of the country,” he added.

“The UAE sees itself as among the best in the world in entrepreneurship and is intensely proud of its competitive, knowledge-based economy. By empowering the youth of today and moulding them into the innovators of tomorrow, Imagine Cup acts as a cornerstone of Microsoft’s commitment to realising that vision” said Samer Abu Ltaif, Regional General Manager, Microsoft Gulf. “The unthinkable inventions of our generation – the Internet, 4G connectivity and more – existed in the minds of a select few to begin with. It was only through collaboration and, yes, in some cases, competition, that those technologies came to change the way we live.”