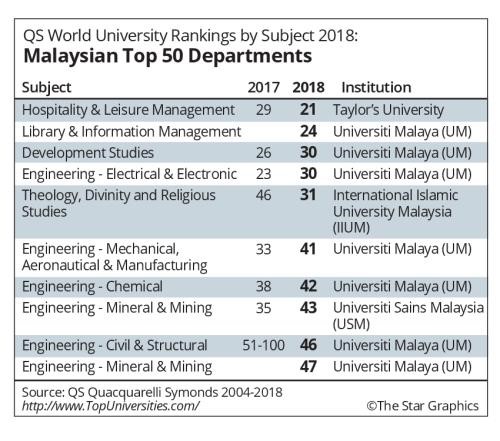 Ten departments in four Malaysian universities have been ranked among the top 50 in the world for their discipline in the Quacquarelli Symonds (QS) World University Rankings by Subject 2018.

Taylor’s University is the highest ranked, rising eight places to 21st for Hospitality and Leisure Management.

Seven of Universiti Malaya’s (UM) departments made it into the list, including a 24th spot for Library and Information Management, which was introduced for the first time.

“Our academic reputation, strong engagement with our local and foreign industry partners and significant investment in research have been key in our rise,” he said, adding that the university targeted the subject to be in the top 10 next year.

“The rankings reflects the international recognition of the quality of UM’s faculties and its graduates,” he said.

IIUM Rector, Prof Datuk Seri Zaleha Kamaruddin, said the improvement served as a boost in leaving its mark in the global academic platform.

“We will continue to build on our reputation and enhance our research, publication and citation record,” she said, adding that the faculty aspired to break into the top 20 next year.

Universiti Sains Malaysia was placed 43rd this year for Mineral and Mining Engineering.

“While overall it is one subject less compared to 2017, it is nevertheless a strong outcome and consistency shown. What’s important now is for our universities to analyse this outcome, benchmark against other universities and look towards continuous improvement to provide the best education possible,” he said.

QS Research Director, Ben Sowter, said the investment in higher education in the country is paying off and rankings are capturing excellence.

“Malaysia has been steadily rising in rankings as reflected in our World University Rankings in June last year.

“So while there has been a minimal decline in this rankings by subject, the World University Rankings shows a positive and solid performance of the leading local universities,” he said.

In total, he said, 162 departments at 17 Malaysian universities are ranked.

WHAT IS THE ROLE OF MUSIC IN YOUR LIFE???

Digital fatigue affects many students. But there’re ways out…