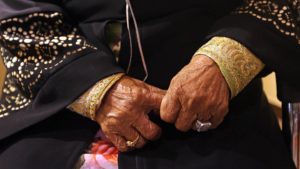 Researchers estimate that a third of dementia cases are preventable.

Tackling smoking, poor education and hearing loss can prevent more than a third of the world’s dementia cases and help prevent an increase in the number of cases in the UAE.

A provocative report in the British journal Lancet on Thursday raised the prospect that a third of dementia cases around the world could be delayed or even prevented by avoiding key risks starting in childhood that can make the brain more vulnerable to memory loss in old age.

Dementia in the Emirates is likely to become the dominant illness among the elderly as doctors have said that “Alzheimer’s, a form of dementia, is going to increase by 600 per cent by 2030”.

The global increase in life expectancy is the single most impressive achievement of modern medicine, and the UAE is one of its examples. But with increasing longevity comes an increasing risk of Alzheimer’s disease as one out of seven elderly in the UAE are likely to develop the mental illness by 2030.

In 2013, the UAE passed a federal law to provide the elderly with better health care and medical insurance. Elderly people, defined by the Ministry of Social Affairs as anyone older than 60, are thought to make up just more than 4 per cent of the 1.1 million Emiratis in the UAE. However, the ministry estimates that figure will grow to 6 per cent by 2017 and to 11 per cent in 2032.

Today nearly 50 million people worldwide have dementia. This figure is projected to increase to 75 million by 2030 and to 132 million by 2050.

The report is the first to quantify nine “potentially modifiable risk factors” for dementia from childhood to old age. The factors are:

“Although dementia is diagnosed in later life, the brain changes usually begin to develop years before, with risk factors for developing the disease occurring throughout life, not just in old age,” said Gill Livingston, psychiatry professor at University College London.

“We believe that a broader approach to prevention of dementia, which reflects these changing risk factors, will benefit our ageing societies and help to prevent the rising number of dementia cases globally.”

Consider physical activity, crucial for heart health. “If, in fact, it should also improve the prospects for cognitive function and dementia, all the better,” said Dr. Richard Hodes, director of the US National Institute on Aging and an avid exerciser.

UAE youth turn their attention to renewable energy and sustainability