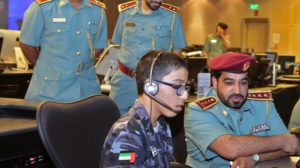 At the Future Police summer academy, some rehearsed responding to emergency calls

They were given the chance to witness police receiving emergency calls from across the emirate and were shown a clip about the facility, its equipment and the process of work.

Two of the students took part in a scenario prepared by police officers and were assigned to respond to emergency calls.

Ahmed Sluiman Al Shehi received a traffic accident call from an Arab national. He managed to register the incident in the system, in which his colleague, Mudad Al Kaabi, successfully referred it to the nearest police patrol.

Colonel Abdullah Salem Al Tamimi, supervisor of the programme, urged the students to make use of the experience, which included cultural, sport and scientific activities.

“This will help raise their security awareness and will raise their national pride,” said Col Al Tamimi.