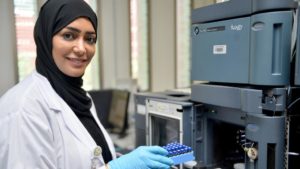 Academics at the United Arab Emirates University have compiled what they say is the first authoritative guide detailing the nutritional composition of traditional Emirati foods and its impact on blood sugar levels.

Led by Dr Ayesha Al Dhaheri, chair of the nutrition and health department at UAEU’s College of Food and Agriculture, the research team tested the effects of 18 Emirati dishes — five breads, three entrees, five main dishes and five desserts — on 88 volunteers to come up with a comprehensive list of each dish’s macro and micronutrients, including the glycemic index, which is the rating system for how carbohydrates in food affects an individual’s blood sugar level.

“We launched this research to address the lack of information available on national Emirati food — the traditional foods,” said Dr Al Dhaheri. “There was nothing about the nutrients composition, there was nothing about the foods’ correlation with the disease prevalence in the UAE. A person can tell you what they eat, but without such nutritional information, you cannot analyse their dietary information because you need that baseline, you need to know how much carbohydrates, protein, fat, vitamins, minerals, or even caffeine in a diet.”

The first international table of glycemic index was published in 1995 and included 565 food entries. The most recent version, published in 2008, contains the glycemic index (GI) and glycemic load (GL) values if 2,487 food items, according to a report co-authored by Dr Al Dhaheri.

“However, the majority of the published GI and GL values are from Western countries and not much data are available about the GI values of Arabic foods, particularly Emirati foods,” according to the study “Glycaemic index and glycaemic load values of commonly consumed foods in the United Arab Emirates,” published earlier this year in the British Journal of Nutrition. “The main aim of this study is to provide reliable values of GI and GL of some commonly consumed foods in the United Arab Emirates.”

The study is of particular value to the country because “all of the evidence-based recommendations for the management of diabetes from the major diabetes organisations around the world – the American Diabetes Association; Canadian Diabetes Association and Diabetes UK for example – now advise people with type 1 and type 2 diabetes to use the GI or GL as part of the nutritional management of their condition,” according to the University of Sydney, which manages the glycemicindex.com.

According to the World Health Organization, 8 per cent of the population in the UAE has diabetes. 70.7 per cent is overweight and 34.5 per cent is obese.

The 37 male and 51 female volunteers who participated in the study were recruited from the UAEU campus community and required to complete a health questionnaire and supply body measurements. Prior to the test day, the volunteers had to fast for 12 hours. Their blood was collected numerous times on the day of the test: once at the beginning to establish a fasting blood sample, and then every 15 minutes for the first hour after consuming the dish. More blood samples were collected 90 minutes and 120 minutes after the volunteers ate the Emirati food.

“You need to assess how this food reacts in a human body after consumption, especially in terms of the blood glucose level, after 15 minutes, a half an hour, one hour and up to two hours, because when we feel hungry, this mean that our blood glucose level has dropped down and our system will trigger the brain to feel hungry,” said Dr Al Dhaheri. “Then we end up eating food to reduce the hunger, but when a food is high with protein or high with fibre, we end up feeling satisfied, we are not hungry anymore. And this is where our blood sugar is stable in our blood. Or the food that we have consumed is releasing the sugar gradually, not at one time.”

Each food was tested by at least 15 participants, which is higher than the international standard of 10 required for glycemic index testing, according to Dr Al Dhaheri.

The results showed a “wide range” of glycemic index values, ranging from a low of 42 for harees to a high of 77 for Muhalla bread, on a scale of 0 to 100. Food that ranks 55 or lower on the glycemic index are considered low. These include whole wheat break, oatmeal, barley, pasta, sweet potato, most fruits and non-starchy vegetable and carrots.

Dr Al Dhaheri said her team is working on compiling the information for 24 Emirati dishes in a booklet to be distributed for free to the public later this year. The research is ongoing as new Emirati foods are discovered, she said.

Burjeel Hospital clinical dietician Shukri Farah was not involved with the study but said its findings are timely.

“Especially with the number of people who have diabetes increasing, it’s good to know the glycemic index, and how to control our blood sugar,” said Farah. “It came at a good time because it’s needed, actually, because the number of diabetic people in the UAE is increasing year after year.”

Harees (beef), cracked or coarsely-ground wheat, boiled and mixed with meat. Its consistency varies between a porridge and a dumpling, , glycemic index per 212g: 42, low

Arseyah, similar to harees but cooked with white rice and blended with chicken, glycemic index per 261g: 72, high