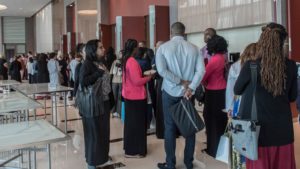 Hundreds of new teachers have arrived in Abu Dhabi as part of their first steps in becoming the emirate’s newest public school educators.

The international recruits arrived in the capital in recent days and on Sunday between 400 and 500 of the English medium teachers and administrators gathered at the Park Rotana Hotel for an induction to life in the country.

Following a morning presentation by Abu Dhabi Educationl Council officials, the teachers spent the afternoon completing banking and housing paperwork to get started in their new lives. Adec also invited a number of service providers, such as car rental companies and home furniture vendors, to attend the orientation and offer the teachers services at a discounted price.

“That is what’s great, they basically give you access to everything to set you up,” said Esther Madray, 29, a South African mother of one toddler who arrived Thursday.

Like many workers who leave their homelands to move to the UAE, Ms Madray said she was attracted by the generous salary offered to public school teachers here, the high quality of life and opportunity to experience a new culture.

For many of the teachers who arrived this week, their journey to Abu Dhabi began in February when they applied for jobs through international recruiters. By April, they received written confirmation they were selected to teach starting this September. Earlier this month, they finally received their e-tickets confirming their international relocation. While the process may have felt like a lifetime for some, at least one teacher said it was done in the blink of an eye.

“It happened so quickly, I don’t think I had time to think about it,” said Meraaj Sayed, a 54-year-old South African who was encouraged by her husband to apply now that their three children are adults. “We thought it would be nice for us, we could travel the world and see the world. The kids are sorted, now it’s our time.”

All of the teachers and administrators that spoke with The National said this was their first trip to the UAE. For at least one South African principal, the flight he boarded to the capital was the first he had ever taken in his life.

“Everything here looks like they built it yesterday. It’s new, like a new toy,” said Michael, 50, a South African principal. “And compared to where I come from, from Cape Town, South Africa, it’s incredibly safe.”

Michael, who asked his surname not be used, said he gave up his job as a public school principal in South Africa so that he could earn more money.

“I am going to teach here and it’s almost triple what I was getting. I am serious,” he said. “And I suppose it’s an opportunity to see a new part of the world. I have been placed in Al Dhafra, the Western Region and I’m pretty excited about it because I want to get out of the city. I am looking forward to it.”

For South African Vincent Leung, a 28-year-old father of two young children, Abu Dhabi holds the promise of a better life for his young family.

“My main aim is to improve my next generation – it is safer here, there is better education, that is why my wife and I decided to come here,” said Mr Leung, a maths teacher.

For Ms Sayed, the hardest part of the transition was leaving family behind.

“The emotions are there, I saw it on the flight, the ladies were just crying,” said Ms Sayed. “I had to leave a grandson behind, eight months old. It’s hard.”

But she is also looking forward to starting her new life, she said.

“I am somebody who keeps upgrading, I embrace change,” said Ms Sayed, who has taught in her home country for more than 30 years. “We are adaptable as teachers. You can throw us anywhere. We know how to handle the children, and I know the children are going to be different, but that being said, lots of children are the same too. Maybe the culture is a bit different, but hey I’m here to embrace it. It is exhilarating.”