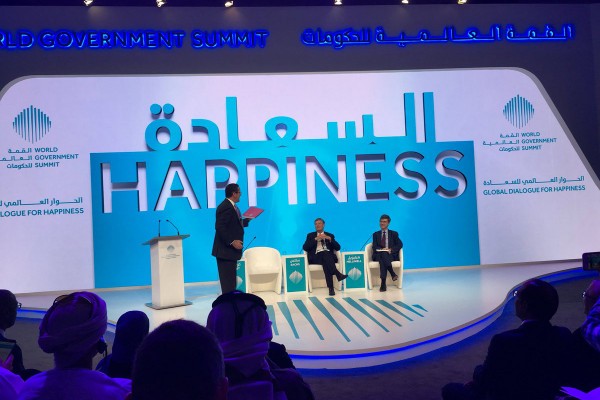 DUBAI, 10th February, 2018 (WAM) — The second Global Dialogue for Happiness reviewed on Saturday the 170 best international experiences in happiness and wellbeing in the presence of international organizations and institutions, and more than 500 government officials, leading scientists, experts, and entrepreneurs from around the world.

The Global Dialogue for Happiness started as part of the sixth World Governments Summit, which begins on Sunday, February 11, 2018, under the patronage of His Highness Sheikh Mohammed bin Rashid Al Maktoum, Vice President and Prime Minister of the UAE and Ruler of Dubai.

The Global Dialogue for Happiness provides a platform to experiment and share practical and inspiring policy models and ideas from around the world that focus on ways to achieve happiness and wellbeing.

Nisha Jagtiani, Landmark Group Director and Board Member of the group that is the exclusive retail partner of the Global Dialogue for Happiness, participated in the session “the Return on Happiness” and reviewed Landmark’s experience in launching initiatives and programs aimed at bringing happiness to employees and customers. The session was moderated by Jane Lim, Chief Executive Officer of Happiness at Delivering Happiness.

The second Global Dialogue for Happiness, launched at the Dialogue, reviewed the latest technological innovations to gauge the impact of policies on the happiness of communities. The report was authored by more than 60 scientists, experts and international leaders, and will form a reliable reference for global best practices. It is further an index of inspirational stories of happiness and wellbeing, celebrating the best achievements of governments in this context.

In the session “Life, Liberty, and the Pursuit of Scandinavian Happiness”, Alexander Stubb, Vice-President of European Investment Bank, former Prime Minister of Finland, discussed successful experiences in promoting happiness in the majority of countries in the region that have succeeded in applying happiness science in its government policy.

One of the global experiences reviewed by the Global Dialogue for Happiness was Australia’s experience in the areas of health and education. It was highlighted by Gabrielle Kelly, Director of the Center for Quality of Life and Flexibility at the South Australia Institute for Health and Medical Research; and Leah Waters, Director of the Center for Positive Psychology at the University of Melbourne.

In a session entitled “Searching the World for Happiness”, the World Dialogue for Happiness hosted Meik Wiking, Executive Director of the Happiness Research Institute in Denmark who spoke about his book ‘The Little Book of Lykke’, which focuses on the components of shared happiness among nations and sheds light on the experiences of more than 20 countries. Faisal Bin Saeed Bafarat, Chairman of the General Authority for Entertainment in Saudi Arabia, highlighted the quality of life as a priority in the Kingdom’s vision.

Professor Ruut Veenhoven of Erasmus University Rotterdam, one of the founders of the World Happiness Database, participated in a session entitled “Can Happiness Measure Progress in Society?”, where he addressed the mechanisms of using happiness to measure progress.

The sessions of this track dealt with how governments can design happiness policies. In a session entitled “A Nudge Towards Wellbeing”, Cass Sunstein, a professor of Behavioral Economics at Harvard University, spoke about the role of government and private institutions in helping people to make better choices in their lives. While Paul Dolan, professor of behavioral science at the London School of Economics and Political Science, spoke in a session entitled “What Makes People Happy?”.

In the “Social Media: The Happiness Vault” session, Dr. Andy Schwartz, Principal Investigator of the World Well-Being Project At the University of Pennsylvania, described the role of technology in analyzing big data from social media platforms to measure the impact of happiness policies. He also underlined the importance of the project, which includes data from more than 160 countries.

The World Dialogue for Happiness further reviewed notable applications that aim to promote happiness and welling, such as the Happify application. In a session entitled “Gamifying Happiness,” Dr. Acacia Parks, Chief Scientist of Happify, spoke about this innovative digital platform, which enhances the rates of happiness and positive thinking among its users.

Dr. Saki Santorelli, a professor of Medicine at the University of Massachusetts, also addressed the importance of mental alertness in the digital age.

The Global Dialogue for Happiness devoted several session to examine the science of happiness. Dr. James Doty, the Clinical professor of Neurosurgery, Director and Founder of the Compassion and Altruism Research and Education at Stanford University, demonstrated in a session titled “Solving Mysteries of the Brain and Secrets of the Heart” how science has shown the compassion trait to enhance happiness and wellbeing.

Author Emily Esfahani Smith spoke in “The Power of Meaning: Crafting a Life that Matters” session, named after her bestseller book.

The Global Dialogue for Happiness highlighted the implications of technological progress on wellbeing, mental alertness and the challenges posed by the excessive use of smartphones. The Dialogue also discussed the relationship between nutrition and happiness and the effect of macrobiotics on mental state in a session with Dr. John Cryan, Professor and Chair of the Department of Anatomy and Neuroscience at Cork College in Ireland.

Professor of Psychology at the University of California Riverside, Sonja Lyubomirsky spoke at a session entitled “The Human Values of Happiness” on feeling happy in difficult times.

In the session “Measuring What We Treasure: Student Wellbeing in Dubai”, Dr. Abdulla Karam, Director General of the Knowledge and Human Development Authority (KHDA), highlighted the UAE experience in establishing the principles of positive education and measuring the quality of life of school students.

Professor Lea Waters, Director of the Center for Positive Psychology at the University of Melbourne, spoke at a session entitled “School Kids Can Be Happier, and We Can Prove It”, while Goldie Hawn, Founder of the Hawn Foundation, spoke at the “Mind Up and Be Happy” session.

The Global Dialogue for Happiness presented a number of inspirational human stories from around the world, hosting for instance Matthieu Ricard, a world-renowned author who participated in a 12-year study under the supervision of Neuroscientist Richard Davidson of the University of Wisconsin, who linked Richards with 265 sensors to study the effect of meditation on his mind. The story was narrated in a session entitled “Altruism: The Heart of Happiness”.

Ahead of International Day of Women and Girls in Science, UN calls for smashing stereotypes