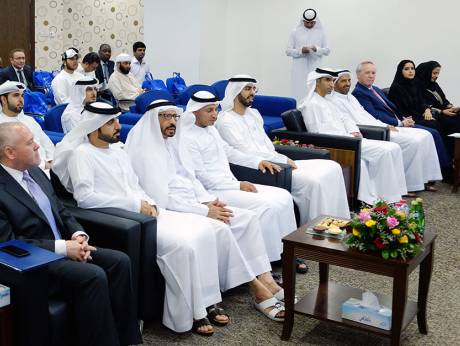 Dubai: Rapid advancements in artificial intelligence (AI) and the environment in the UAE will be met by newly unveiled university programmes, said two federal cabinet ministers on Tuesday.

Speaking at a press conference at The British University in Dubai (BUiD), where the UAE’s first AI undergraduate programme was launched, Omar Sultan Al Olama, Minister of State for Artificial Intelligence, said that giving students the edge now will serve them well in the next decade.

The research-based university announced the launch of a total of seven new bachelor’s degree programmes in areas of IT, engineering, business and architecture, including Dh4.5 million worth of scholarships to be offered to high-achieving students planning to study at the university.

Many of the programmes introduced touch on areas of sustainability, climate change, AI and innovation.

“I truly believe that AI, if used in the right hands, is going to solve all the extremely important challenges like climate change, poverty and access to technology as well as open new frontiers,” said the world’s first appointed AI minister.


“I believe the future will be more positive and hope this move will graduate more students with PhDs in important fields.”

Dr Thani Ahmad Al Zeyoudi, Minister of Climate Change and Environment, said future generations will have to be equipped with the right skills to deal with the most pressing issues facing the world.

“Addressing climate change requires a collective effort. Future generations are not ready to face the challenges, this is why academic institutions have a responsibility of turning them into agents of change to address these issues,” he said.

Al Zeyoudi, who earned his PhD from the university, said that the new degrees will serve various important fields, not only the environment but also several ministries in the UAE.

The new four-year undergraduate programmes, especially the Bachelor of Science in Computer Science and AI, are expected to attract a large number of students to the university, according to the Abdullah Al Shamsi, vice-chancellor of BUiD.

The university also announced that it has entered a collaborative agreement with two prestigious universities in the UK in which students can earn a double degree.

“We have established a partnership with the University of Edinburgh and University of Glasgow which give students the opportunity to finish two years here and then complete the other two in the UK,” he said.

The ICT Fund, which works under the realm of Telecommunications Regulatory Authority (TRA), announced unlimited scholarships for Emiratis to study at the university.

Chinese language to be taught in 100 UAE schools