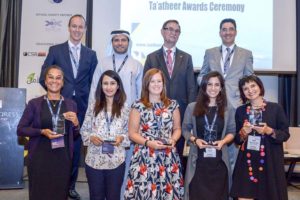 23 May 2017, Dubai, UAE – Leading social impact initiatives that displayed high impact and sustainability took top honours at the Ta’atheer Awards. The ceremony took place at The Address Hotel, Dubai Marina on 16 May 2017, and is the region’s most prestigious celebration of organisations that are giving back to their communities.

Barclays has won the Best Education Improvement Award, recognising the bank’s innovation in engaging facilities management workers. Over 120 workers were offered an ongoing training which focuses on providing workers with the fundamentals of financial literacy, as well as professional development skills such as business English.

Andrew Mortimer, Managing Director, Country Manager, and Chief Operating Officer for Barclays MENA, said: “We are thrilled to receive this award. At Barclays, we believe that we can only succeed if the communities in which we live and work in also prosper. The long-term community support and development is not conducted via ad hoc initiatives, but is a central component of our strategy. It is the way we do business.”

He went on to say “Since launching the program, we’ve witnessed an observable impact on the workers, with significant improvements to both their English language and financial literacy skills. We are proud to say that we have witnessed a direct increase in the participants’ self-confidence and quality of life, something that will serve them well in their future professional pursuits.”

HSBC in collaboration with The British Council won the Best CSR Impact Initiative. Speaking at the occasion, Sabrin Rahman, Head of Corporate Sustainability, MENA and Turkey at HSBC said; “I am extremely proud of the recognition received by Taqaddam as an initiative that has had significant social impact in the Arab region. What began initially as innovation in blended learning has surpassed our expectations in terms of reach and scale. Over 3,090 students and 200 teachers across the region have benefitted from the programme, which has been made richer by HSBC volunteers sharing their experiences to make the learning themes come to life. This is a wonderful example of what can be achieved through cross-sector collaboration and we thank our partners, the British Council and Spark & Mettle for their enthusiasm in making Taqaddam a success.”

The third bank to take home an award was Ebdaa Bank for Microfinance who won the Best Women Empowerment Award. Other organisations from the region that won awards include Mowgli Foundation who won Best Employment Generation Award, SEDCO Holding Group who won Best CSR Integrated Business and the most contested category was the Best NGO which was taken by two organisations who scored the same with our judging panel – Unite Lebanon Youth Project and Royal Health Awareness Society.