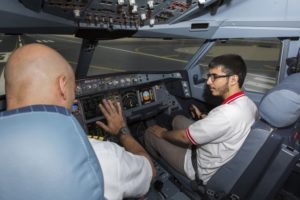 ABU DHABI // A group of special needs pupils were given a chance to learn about the science of flight by Etihad Airways.

The nine youngsters from the Future Rehabilitation Centre in Abu Dhabi were taken on a surprise visit to the airline’s state-of-the-art flight simulator.

While there, the 12 to 16-year-olds learnt about flight regulations, aircraft technology and how to be an effective co-pilot.

“Our students were all beaming when they told us of their exciting experiences at the simulator,” said Mowfaq Mustafa, director of the Future Rehabilitation Centre.

“This initiative gave our students a glimpse of what the future can provide for people who dream and work hard, which is something that we are trying to instil in them.

“I thank Etihad Airways and the team behind this opportunity.”

While in the simulator, the group enjoyed a virtual flight to London Heathrow and also soared over the Abu Dhabi Corniche in the cockpit of the airline’s flagship Airbus A380.

Hosted by two UAE national graduate managers, the pupils also had a tour of the academy where captains and cabin crew are trained. The students were also awarded with Honorary Junior Pilot certificates to commemorate the day.

“In the Year of Giving, we are delighted to collaborate with the Future Rehabilitation Centre on this initiative, encouraging youngsters to reach for the skies,” said Majed Al Marzouqi, vice president flight operations at Etihad Airways.

This year has been designated the Year of Giving by President Sheikh Khalifa.

The airline has pledged to donate one dirham for every ticket sold in the UAE in support of the initiative.

Boy fights off cancer, scores 95% in CBSE board exams