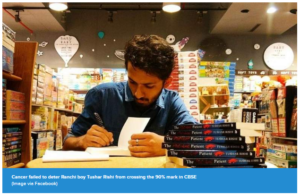 Boy fights off cancer, scores 95% in CBSE board exams

He battled the disease as he prepared for his exams.

The CBSE (Central Board of Secondary Education) results are out and 82% have passed. A Noida girl, Raksha Gopal, topped with 99.6 per cent. There are other achievers. But possibly none like the Ranchi boy, Tushar Rishi, who scored 95 per cent.

Tushar got to know he has cancer in his left knee in 2014. The Delhi Public School student and his parents went into a shock. Tushar could not take the class 10 Board exams. The next 11 months were traumatic and painful. Tushar had to undergo 11 chemotherapy sessions.

Every three months, he had to travel to the All India Institute of Medical Sciences (AIIMS) in Delhi. The illness and the cure naturally disrupted Tushar’s studies. But he made a determined and successful attempt at focusing on the present and his studies.

Tushar’s mother, Ritu Aggarwal, is a professor at Birla Institute of Technology. His father, Shashi Bhushan Agarwal, is with the Bihar state agricultural department. They are proud of him. “It’s not just his studies; it’s how he fights his handicap,” his mother said.

Says his father: “Tushar did not go for any special coaching. It would have been perhaps too much of a strain. We have seen him battle with cancer and I know how difficult it was for him. I hope he stays healthy and achieves all his career objectives.”

Despite being a science student – he scored 93 per cent in Maths, and 95 per cent in physics. Tushar prefers to graduate in English or Economics from Delhi University.

In the face of all his hardships, Tushar has managed to write a book, The Patient Patient, which is about his fight against cancer. It’s an inspirational story, and, Tushar said, it’s doing well on Amazon.

Although he is out of critical danger just now, Tushar has to observe a certain form of diet, and follow a strict regime of medicines and therapy. But as of now the boy has beaten both his condition and the Boards.