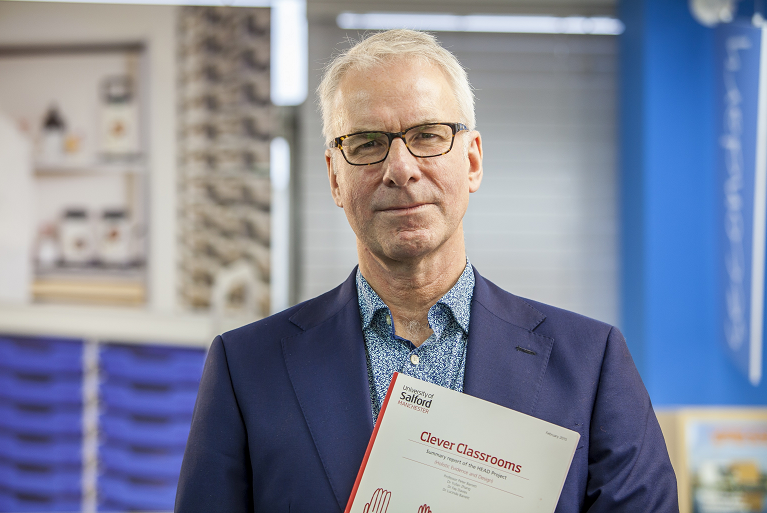 The design of a classroom does make a difference to pupil learning.

“There are rarely good or bad schools, rather there are more or less effective classrooms.”

Although everyone knows it instinctively, it has been surprisingly difficult to actually prove that the design of a classroom impacts on the learning rates of pupils. It took eight years of effort by a team of researchers at the University of Salford, Manchester to provide a provable link between the physical space and learning outcomes.  A survey which included 3766 children in 137 classrooms from 27 very different schools provided firm evidence that the physical characteristics of the classroom accounted for 16% of the variation in the learning progress of these children.  Details of our large study are given in a peer reviewed journal [1] and in an illustrated guide for designers and teachers, entitled “Clever Classrooms”[2]. These are freely available.

To attack the difficulty of separating the impact of the space itself from other factors the HEAD (Holistic Evidence and Design) study did two things. First, it focused on primary schools, as the pupils are mainly in the same classroom for the whole year.  This means that any possible impact would be maximised and also that there would be strong metrics of their academic progress. Second, multilevel statistical modelling was used to differentiate the impacts of the classroom itself, from variations owing to individual pupil differences or whole school effects.

In addition, the HEAD study takes an approach that places the pupil at the centre of analysis. This includes everything (as far as possible) that impacts on the pupil through their senses and is interpreted by their brain.  Discussions with colleagues in the A.N.F.A. (Academy of Neuroscience for Architecture) and others led to the development of the, much broader than usual, “SIN” framework of factors to be considered. These are as follows.

It can be seen that the naturalness factors are fairly familiar and it turns out that these are very important, collectively accounting for about half of the impact of the classroom on learning.

More novel and surprising is the clear finding that the individualisation and stimulation factors, taken together, are equally important. They each drive about a quarter of the impact on learning.

So the picture is clear. To learn optimally, pupils need classroom spaces that are healthy (naturalness), distinctive, allow ownership and personalisation (individualisation), and that present an appropriate level of ambient stimulation.  This last factor is the result of a combination of the visual complexity of the space and of the colour scheme.  The HEAD study clearly showed for the first time that in practice a mid-level of stimulation is ideal for learning, not too boring or too chaotic. 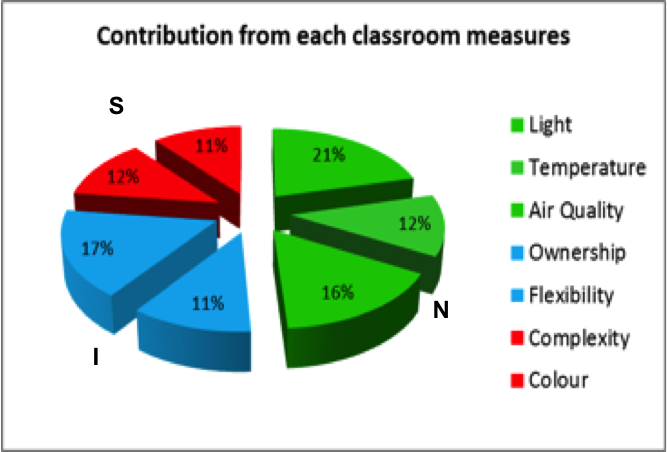 The figure here summarises the impacts associated with the seven design parameters found to be statistically significant.

Considerable effort was taken to include school-level factors, such as the layout of the school and outside play facilities, but the variation between classrooms within each school tended to be greater than the aggregate differences between schools.  In short, in terms of learning progress, the primary school pupil’s classroom is their world and as such is where effort needs to be focused when investing in the infrastructure.  This does not mean that other broader factors should be ignored, but it argues strongly for making sure that each (existing or proposed) classroom works in its own right and from there to build out to a broader picture.  This could be styled “inside-out” design and is captured by the thought that there are rarely good or bad schools, rather there are more or less effective classrooms.  That is the detailed level of analysis that is needed to bring about improvements that will impact on the educational progress of pupils.

The naturalness design parameters of good (day)lighting, control over temperature and ventilation are all important in relation to learning.  So windows should not be covered with display material, individual classrooms should have local thermostats, and windows should be opened when rooms are getting stuffy (which they often are).   These are all quite obvious in one way, but in practice are often not given the high priority their connection to learning demands. In this case, as with the following factors, there is much that can be done in existing spaces, as well as at the design stage.

The more novel individualisation design parameters of flexibility and ownership are, respectively, about offering options to pupils and teachers and the opportunity to create a personal connection with their classroom.  Some of this is about the spaces created within and adjacent to the classroom. These can support a variety of activities, which is especially important for younger children where the teaching methods are typically more play-based.  So, even in a rectangular room, learning zones (eg for reading, art, role-play) can be established with the creative use of furniture.  Without this infrastructure it is hard for teachers to deliver the curriculum in an interesting and engaging way. Ownership can come from visible signs of the pupils – their work on display boards on the wall, their names on trays, etc.   Additionally, the classroom furniture should be age-appropriate and of good quality.  At one level this seems to send a message to the children that they are valued, whilst at a practical level a child sitting on a chair, and at a desk that are too big for them is not going to be comfortable. In contrast to the UK, in Norway, for example, it is absolutely normal for all pupils to have height-adjustable chairs. The aim in relation to “individualisation” is get to the point where the pupils are comfortable ergonomically and clearly feel that “this is our classroom”.

The other novel area concerns the appropriate level of stimulation.  Visual complexity can come from the shape and form of the room that can be addressed through the basic structure, or via learning zones as mentioned above.  It can also be strongly driven by the extent and coherence of displays.  So there can be a tension here with individualisation as the level of ambient visual stimulation can become chaotic.  This is not good for learning, but equally too bland is not good either. A moderate level of visual complexity should be sought and can be balanced out to a degree by the other element contributing to stimulation, namely the colours used in the classroom.  These again should, taken together, avoid extremes of brightness and dullness.  Walls, floors, furniture, blinds, etc all contribute, but for walls, typically a light, calm colour generally, plus an area of brighter colour, maybe on the “teaching wall” can work well.

Overall, what is suggested is that the HEAD findings mean that it is now a practical proposition for teachers and designers to look at classrooms as an active contributor to the learning process. We have an extra set of levers to be pulled as appropriate to assist as we strive for excellence in education!

Professor Peter Barrett
Emeritus professor, University of Salford
Honorary Research Fellow, University of Oxford
Please Note: Education professionals who wish to experience first-hand new developments in classroom designs to enhance the learning experience should visit GESS Dubai at the Dubai World Trade Centre from 27 February to 1 March 2018. Registration is now open via the website at www.gessdubai.com. For more information on the HEAD project, click on www.cleverclassroomsdesign.co.uk.)

The College of Fashion & Design Appoints New President and CEO