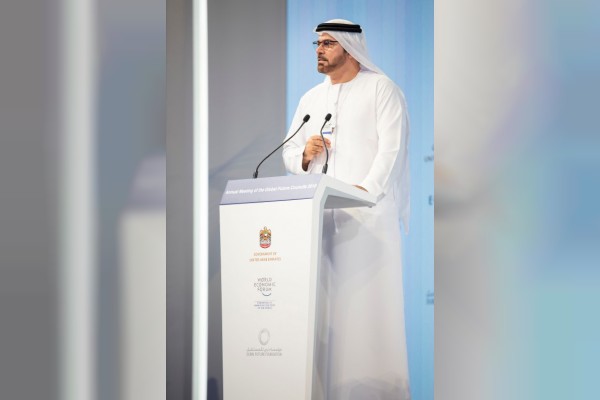 DUBAI, 12th November 2018 (WAM) – Mohammed Abdullah Al Gergawi, Minister of Cabinet Affairs and the Future and Co-chair of the Global Future Councils, announced that the United Arab Emirates looks at the future as a field for creating opportunities brought about by technology and advanced science. It embraces a comprehensive belief that this forward-looking task is a global shared responsibility that demands international cooperation to meet its requirements.

Speaking at the closing session of the third Annual Meeting of the Global Future Councils, held in Dubai under the patronage of His Highness Sheikh Mohammed bin Rashid Al Maktoum, Vice President and Prime Minister of the UAE and Ruler of Dubai, in collaboration between the UAE Government and the World Economic Forum, Al Gergawi said: “The Global Future Councils meetings focused on shaping the future and enhancing public-private partnerships to develop effective solutions to global challenges. The meetings also examined the myriad of opportunities facilitated by the new phase of globalization – Globalization 4.0- driven by the Fourth Industrial Revolution (4IR) and its positive contribution to the life of more than 7 billion people.”

He added: “The UAE reiterates its unwavering commitment to support future sectors, drive human prosperity and come up with innovative ideas to keep pace with future trends. We seek to build on the encouraging opportunities to reinforce the role of the Global Future Council as a platform to acheive further achievements and activate partnerships.”

“Today, the Global Future Councils have become a global knowledge hub that shapes the future and a meeting place for the world’s most prestigious decision-makers, officials and experts wishing to leverage future foresight tools to serve their countries and people. The valuable set of knowledge, expertise and experiences launched during this year’s meeting will be compiled into a bundle of knowledge products.”

Concluding, Al Gergawi announced that the fourth Meeting of the Annual Global Future Councils will be held in Dubai, on 3-4 November 2019.

During the third Annual Meeting of the Global Future Councils, organized by the UAE Government and the World Economic Forum, which took place in Dubai on November 11 and 12, the UAE Government launched three initiatives, namely the Future Possibilities Report, the Future Possibilists Index, and the Department of Possibilities. These initiatives aim to shed the light on promising and innovative ideas and emerging fields, classify future trends based on key vital sectors around the world, as well as analyze and evaluate proposed ideas.

The Global Future Councils meeting also witnessed the launch of the Future Transformation Platform, an interactive knowledge tool covering more than 120 different topics pertaining to the future of the world’s vital sectors and countries, as well as the issues of global concern. The platform features a host of big data and future scenarios designed to support decision-making and government efforts to keep pace with potential emerging global trends. The platform further focuses on existing and future sectors, highlights the appropriate mechanisms to enhance cooperation among them and reflects a comprehensive image of the future. It includes a set of different options for users and is available in a multitude of international languages, including Arabic.

On the first day of the Meeting, the UAE Government launched the Guidance Framework to establish a integrated and secure data environment. This is aligned with the government’s efforts to embrace the Fourth Industrial Revolution (4IR) technologies and implement one of the three main pillars of the Fourth Industrial Revolution Protocol, which was announced last year in partnership with the World Economic Forum. The Protocol embodies the UAE’s strategy for the Fourth Industrial Revolution, which aims to strengthen the UAE’s position as a global hub for 4IR and an open laboratory for experimenting with its advanced technologies on three stages: providing an integrated and secure data environment; formulating the policies and legislation of the 4IR and building a unified system of values and ethics to guide 4IR technologies.

The UAE government announced activating the UAE Center for Future Readiness that aims to strengthen governments’ capabilities in future readiness through adopting proactive thinking based on studies, researches and scientific foresight. The Center also helps governments set the basic structures while supporting them with the necessary tools, quick delivery systems, the ability to compete and innovate future solutions.

The 4th UAE Industrial Revolution Council held its first meeting in the framework of the third Meeting of the Future World Councils to discuss plans to develop key priority sectors, ways of employing technology and innovation, and the tools of the Fourth Industrial Revolution in serving government work and vital sectors, thus contributing to improving the quality of life and achieving a better future.

At the opening session of the third Annual Meeting of the Global Future Councils, under the theme ‘Globalization 4.0’, participants stressed that the new phase of globalization – Globalization 4.0 driven by the Fourth Industrial Revolution and the new economic and social models it produced, offers a golden opportunity for world countries to join efforts to establish a unified frameworks to address geopolitical, economic, technological and climate challenges; as well as to develop a joint action plan to adapt the Fourth Industrial Revolution and Artificial Intelligence applications to create a better future for humanity.

The opening day of the third Annual Meeting of the Global Future Councils, included a special session titled ‘Jobs in the Fourth Industrial Revolution (4IR)’. The session was moderated by a panel of global experts in the world economy, including Professor Mariana Mazzucato (PhD), Founder and Director of the University College London (UCL) Institute for Innovation & Public Purpose (IIPP); Andrew McAfee, MIT’s principal research scientist and co-director and co-founder of the MIT initiative on digital economy; Saadia Zahidi, Head of Education, Gender and Work at the World Economic Forum; and Oliver Kahn, Media Officer, World Economic Forum. Participants highlighted some of the most significant changes in jobs in different sectors and disciplines and discussed various aspects of the impact of technological progress, demographic changes and new business models on the nature of labor markets, the implications of the quality of the labor required and their qualification levels, as well as the strategies and actions required in the coming years to reduce the size of job losses due to adoption of automation techniques and artificial intelligence in operational processes .

The Global Future Councils meetings bring together more than 700 of the most relevant and knowledgeable scientists, futurists and experts, grouped in 38 expertise-based, thematic councils that explore the future of jobs, society, economy, technology, governance and the environment.