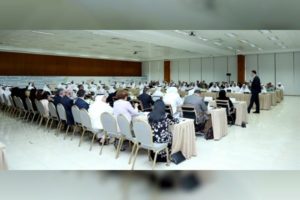 ABU DHABI – The Central Bank of the UAE is holding a forum for its strategic partners and national agenda executive teams.

The forum comes at the beginning of the Fourth Government Strategic Session 2017-2021, which has a significant importance since it is the last session before UAE Vision 2021 and is essential for the achievement of the national agenda, Mubarak Rashid Al Mansouri, Governor of the Bank and Chair of the Forum, said in his opening remarks.

This plan comprises joint projects with a number of partners, and hence establishes co-operation, coordination, and integration between different entities to reach the desired national objectives, he said.

Al Mansouri praised the heads of the executive teams for participating in the gathering. He also stressed that everyone should work together to achieve the objectives of the national agenda body. It was formed and is supported in accordance with the directives of Vice President and Prime Minister and Ruler of Dubai His Highness Sheikh Mohammed bin Rashid Al Maktoum to accelerate the achievement of the national agenda.

“The Central Bank’s Strategy 2017-2021 was developed after conducting a meticulous analysis of internal and external work environments and studying relevant competitiveness indices. This strategy comes as a response to the ministerial retreat held at the end of January last year in the presence and supervision of His Highness Sheikh Mohammed bin Rashid and His Highness Sheikh Mohamed bin Zayed Al Nahyan, Crown Prince of Abu Dhabi and Deputy Supreme Commander of the UAE Armed Forces. The retreat witnessed discussions on how to boost the UAE non-oil economy and laid down various potential scenarios for new sectors and areas of the economy,” he said.

The governor stated that the Central Bank’s 2017-2021 Strategy is an ambitious plan, and the management and staff are determined to implement it effectively and efficiently. The strategy comprises everything that can be done to achieve the UAE Vision, in accordance with the Central Bank’s mandate. It also contains a number of initiatives for developing a master plan and roadmap for the financial sector, which requires the bank to consult with its strategic partners in this sector.

Activities during the forum included presentations made by Strategy & Shaping the Future Department staff about the details of the plan and joint projects with different entities. Clarifications were also made regarding the mechanisms to support the national agenda executive teams and UAE’s competitiveness The forum was attended by Dr. Saeed Abdulla Al Ghafli, Director-General of the Emirates Identity Authority, Nasser Al Hamili, Under-Secretary of Ministry of Human Resources and Emiratisation for Emiratisation Affairs, in addition to the leaders of the national agenda executive teams with respect to international foreign investment and competitiveness index, Emiratisation, entrepreneurship, SME’s, global innovation index, and economic performance index.