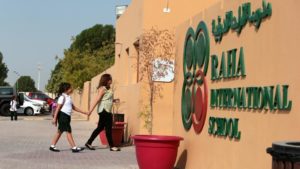 The Abu Dhabi Department of Education and Knowledge (Adek) said private schools have shown “tremendous progress” in the latest round of inspections.

While not a single private school in the emirate of Abu Dhabi earned the much-coveted “outstanding” ranking during the last academic year, the number of failing schools operating in the emirate continues to shrink.

The education regulator says  private schools in Abu Dhabi are continuing to improve, with the number receiving poor rankings shrinking even further.

The Abu Dhabi Department of Education and Knowledge (Adek) said Saturday that private schools have shown “tremendous progress” in the latest round of inspections.

“Results from the inspection round four are promising and just go to show the tremendous effort exerted by most of the schools, who have partnered with the Department of Education and Knowledge to achieve overall improvement in education,” said Hamad Al Dhaheri, executive director for Adek’s private schools and quality assurance sector.

Under the UAE School Inspection Framework, which was standardised for the country in 2015 by the Ministry of Education, private schools are judged on six performance standards: students’ achievement; students’ personal and social development, and their innovation skills; teaching and assessment; curriculum; the protection, care, guidance and support of students; and leadership and management.

While in Dubai, schools are assessed annually, in Abu Dhabi the inspections are held about once every two years. Schools are ranked on a six-point scale from outstanding to very weak. Outstanding, very good and good schools are grouped as “high performing,” also known as Band A schools. Schools rated as “acceptable” are grouped in Band B, or satisfactory. Failing schools fall into Band C, meaning they are “weak” or “very weak” and “in need of significant improvement”.

Of the 86 private schools the Government inspected in the capital region during the 2016-2017 academic year, none was “outstanding”, but 31 were judged to be “high performing,” according to reports on Adek’s website.

The highest rated schools last year included the American Community School of Abu Dhabi; Brighton College, Abu Dhabi; the British School Al Khubairat; Lycee Louis Massignon School; and Cranleigh School Abu Dhabi, which all earned a “very good” ranking and were grouped in the elite Band A. Another 26 schools were assessed as “good” and also grouped in Band A. In Band B, 37 schools were judged to be satisfactory or acceptable.

Seventeen private schools were “in need of significant improvement”, and only one of these – the MOE-curriculum Al Tharawat National Private School – scored the lowest ranking of “very weak”. The inspection report for one school, Al Marfa’a International School, was not available on Adek’s website and could not be counted in this independent tally.

By comparison, when Adek first started inspecting private schools in the 2009-2011 academic year, it said 72 per cent of schools were “in need of significant improvement”. But the number of failing schools has been steadily declining. It dropped to 66 per cent of all private schools operating in the emirate in 2011-2013; 46 per cent in 2013-2015, and about 22 per cent in 2015-2017, the fourth and latest round of inspections, according to percentages supplied by Adek.

“Schools that have improved are familiar with the Department of Education and Knowledge regulations and work hand in hand with the different and relevant divisions within the Department of Education and Knowledge to ensure students are offered the quality education our leaders and government aspires, one that promotes talent, innovation, dedication and determination among our future generation, which will have a positive impact on the overall education sector,” Mr Al Dhaheri said.

“The expansion of the construction of school buildings, the provision of facilities and educational, health and social services, the creation of a safe environment for learning and the implementation of a unified system for the evaluation of schools, has played a significant role in elevating the overall performance of schools,” Dr Al Nuaimi said.

“But this is not the end of the road. Our responsibility will continue to be directed towards our children and youth in to provide them with education and learning that will enable them to acquire the knowledge and life skills necessary to embark on their successful working lives, while benefiting the nation.”

A school’s inspection appraisal is among the metrics heavily weighed by the Government when deciding whether to approve fee increases. Usually, the higher a school is ranked, the more it can charge in tuition. On the flip side, poor performing schools also run the risk of facing sanctions.

Last year, 26 private schools ranked as weak or very weak in Abu Dhabi were barred by Adek from registering new pupils until they improved.

Yesterday, Adek announced a new incentive for schools to do well. “Outstanding” and “very good” schools that manage to maintain their high quality over a period of three inspection cycles will be exempt from inspections for four years. Currently, only a handful of schools would meet the criteria, but the decision was welcomed, said Jeff Evans, managing director at the education consulting firm, Learning Key.

“The step up from ‘good’ to ‘very good’ is significant in quality terms and Adek had earlier suggested an accreditation category with less frequent inspections,” Mr Evans said.

“I am sure many principals at such flagship schools would also hope to see greater flexibility from regulators. For example, allowing them to obtain ‘teaching school’ status so that suitably qualified fresh graduates can be trained and mentored to rapidly reach QTS (quality teacher status) and the highest professional standards in a UAE context.”

Clive Pierrepont, spokesman for Taaleem, one of the UAE’s largest private school operators, said knowledge sharing had already proven successful among private schools in Dubai and abroad, and that schools in Abu Dhabi would benefit from such an exchange.

“Certainly closer co-operation between schools is highly desirable and effective,” Mr Pierrepont said. “If you can encourage good practice being shared, the exchanging of ideas through professional development and modelling outstanding teaching, it’s a win-win for all concerned.”