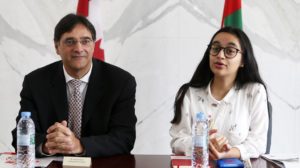 Genes In Space competition winner Alia Al Mansoori is to visit Canada to learn more about the country’s space programme before hopefully going on to study molecular biology.

Alia Al Mansoori dreams of becoming the UAE’s first astronaut and she is confident more young Emiratis will follow in her footsteps and adopt science, technology, engineering and mathematics-related careers.

The winner of the Genes in Space competition, who turns 15 in a few days, will visit Canada for a couple of weeks to get a feel for what her higher education will be like. Earlier this year, Ms Al Mansoori’s experiment applying DNA analysis to real-life challenges in space exploration was chosen as the winner from 110 entries

“I’ve always been interested in science fiction, so being able to experience the science fiction myself and making it into a reality has been something that’s been very important to me,” said the Dubai native during a meeting with the Canadian ambassador to the UAE, Masud Husain, on Monday.

“I feel like a lot of students are still not putting the effort into actually learning what science is all about. There’s so much for science to offer to students and there are many that maybe think it’s not cool or not interesting, but if they do give it a chance and learn about it then I’m sure they will love it.”

Even though she’s met Sheikh Mohammed bin Zayed, Crown Prince of Abu Dhabi and Deputy Supreme Commander of the Armed Forces, at the Sea Palace and is training to be an ambassador at Expo 2020, Ms Al Mansoori still has a lot of ambitious plans.

“After my studies, I want to come back to the UAE and hopefully train to become an astronaut if an astronaut programme should happen,” she said. “I think there should be more Stem-related programmes in the UAE, and the UAE Space Agency is planning to start a national programme, so hopefully I might be one of the first to go there.”

Recent surveys have found that young Emirati students are still not grasping Stem-related subjects at universities – but that is slowly changing.

Ms Al Mansoori plans to visit the Canadian Space Agency, McGill University and a number of laboratories across Canada over two weeks.

“I want to learn more about their astronaut programme, because we don’t have such programmes in the UAE, and how they prepare Canadian astronauts to go to the International Space Station,” she said. “I want to bring some knowledge back with me to the UAE. Canada is such a diverse country and there are so many Stem universities you can visit there.”

After school, she hopes to study molecular biology and medicine. “I want to learn how to do research but also help the crew when I go on a space mission,” she said. “I think by starting an astronaut programme and promoting it well, more young Emiratis would look at it and see it as a possible thing they can enter.”

Ms Al Mansoori is one of five siblings working on ambitious projects such as criminology, policing and genetics and innovation.

“She’s the daughter of the UAE,” said Dr Ahmed Al Mansoori, her father. “We are very proud she will be an Emirati astronaut.”

According to a recent survey of 18,000 international students looking to study abroad, Montreal ranked first.

“Canada has an enormous amount of expertise in Stem and space,” ambassador Husain said. “It built the space arm for the space shuttle and we’ve had a number of astronauts participate in different space missions. There’s a great connection in Canada and in Montreal, in particular, with space, space exploration and research and we hope to increase the number of Emiratis studying there.”

Hamad Al Awadi, from the UAE Embassy in Ottawa, said Ms Al Mansoori set an example for young Emirati women. “This shows us the vision of our leadership and their goals for our people,” he said. “She’s an example of that.”